A Predilection For The Young 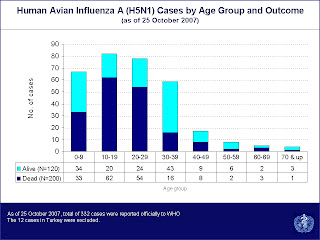 They say a picture is worth a thousand words. When I see this chart, I come up with more than that, but most are unprintable in polite company.

The H5N1 virus, unlike normal influenza, prefers children and young adults. Thus far, it has been its deadliest among teenagers, followed closely by twenty-somethings.

While those in their 30's still appear susceptible (based on this limited dataset), their survival rates have been markedly superior to any other age group under 40, with only a 28% fatality rate.

I say `only', because that group is near the top in survival rates. Compared to any other flu we've ever seen, a 28% CFR (Case Fatality Ratio) is devastating.

The trend is obvious, avian influenza attacks and kills the young.

It gets worse for those aged 10-19, where slightly more than 75% of those infected have perished. The news for 20-somethings isn't much better, with a CFR of 70%.

More startling, perhaps, is the fact that so far, 95% of all reported cases have been in those under the age of 50.

While the number of cases is probably too small to draw any conclusions, the CFR for those over 50 has run about 33%, which is bested only by the 30-39 demographic.

In 1918, we saw something akin to this, with young adults being hit particularly hard by the Spanish Influenza. Those over 65 were largely spared. But the trend today seems even more skewed towards the young than 1918.

Of course we can't know with certainty that this trend will continue should H5N1 achieve pandemic capability. With mutations, the situation could change. Or not.

Anyone who hesitates to close schools early in a severe pandemic, and keep them closed for as long as is required, needs to study this graph. Attempts to `maintain normalcy' or to `ensure education continues uninterrupted' will kill kids.

Sure, closing schools will be a pain. It will inconvenience parents, deprive kids of a social life, deny some kids their school lunches, and interrupt their education.

All serious ramifications, but none are life threatening.

When schools close, however, it will be up to the parents to ensure their kids aren't hanging out together someplace. Kids are not only susceptible to the virus, they have been historically good spreaders of the disease. That means they can spread it amongst themselves, and bring it home to their family.

While our eyes have been glued to the CFR, the other side of the coin is the Attack Rate. And here, we only have guesses.

In 1918, roughly 1/3rd of the world was reportedly infected with the Spanish Flu. Why the other 2/3rds escaped without illness is unknown. Most were certainly exposed, but somehow their immune system fought off the infection.

The thinking is, the next pandemic will have roughly the same attack rate.

The hitch in this thinking is, we don't know why 2/3rds of the population escaped unscathed in 1918. Had a similar H1N1 virus circulated sometime in the 1800's, conveying some immunity - particularly to the elderly?

Now, assume that during the next pandemic 35% contract the flu. That's almost 29 million sick kids.

And to be honest, the attack rate won't be even across all age groups. Those under 20 may well see a 40%+ attack rate while those over 50 see less than 35% infected. But we'll go with 29 Million sick kids.

It is enough to prove a point.

The hope is, the CFR will drop (well, frankly, it will have to plummet to help much), and so it is all but taboo to mention a death toll based on today's fatality rates. In years past, it was assumed any virus would have to give up lethality to become an efficient pandemic. Last year, the WHO indicated that wasn't necessarily so.

The following chart shows the number of fatalities among those under the age of 20, assuming a 35% attack rate, at various CFR's. 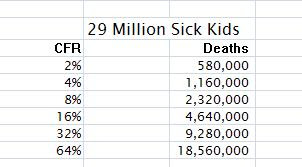 Of course, a 64% fatality rate is unthinkable. As long as you ignore the fact that we are seeing roughly that among reported cases of avian flu right now.

A 2% CFR is quite bad enough, however. More than a half million dead kids. And the virus will have to lose more than 90% of its lethality to get us down to that number.

Personally, I do expect the CFR to drop. How low it will go, I can't say. And frankly, I have no scientific rationale to back that up. Intellectually, I understand that it doesn't have to lower. That the CFR we are seeing today could persist through a pandemic. But for my own sanity, I have to assume the virus will attenuate, at least a little.

We keep hearing that 1918 had a 2% fatality rate, and so that is the definition of a Category 5 Pandemic. The worst of the worst. And that is what the Federal government (but not all states) plan for.

The truth is, it was probably between 5% and 10% world-wide.

The 2% number is a bit of comforting math wizardry based on what happened in the United States. Record keeping was a mess in 1918, and so we will never know the full extent of that pandemic.

If the world's population was roughly 2 billion in 1918, and 33% contracted the flu, then that means roughly 660 million people were sickened. The estimates of deaths run anywhere between 20 and 100 million, with 40 to 60 million being the most favored range.

40 Million deaths would work out to be a 6% CFR

To get down to that 2% number, the 1918 pandemic would have had to of claimed only 13 million lives, which is far below the most conservative estimates.

Trying to extrapolate the future based on a past event is generally folly.

The next pandemic may turn out looking nothing like we expect, or fear. It may not even stem from the H5N1 virus. Hopefully record keeping will be better when the next one rolls around, and future generations will have that data to help them prepare in the future.

But until we know, we must use the best data we have available, no matter how imperfect, to base our preparations on. And right now, those numbers are dismal.

This virus likes kids, and young adults. Our emphasis must be on protecting the most vulnerable of our population.

That means closing schools early in a pandemic, and keeping them closed, for months if need be.

Kids can make up a lost year.

But only if they survive the pandemic.

Beyond being a tragedy beyond comprehension, the loss of millions of young adults and children would cripple our economy, bankrupt social security, and inflict a psychological blow on the survivors unlike anything we've ever experienced.

It must be avoided if humanly possible.

While the CDC has urged that schools be closed early in a pandemic, I keep hearing `hedging' from local officials. Talk of waiting until a certain percentage of students are out with the flu during a pandemic, before closing down.

Waiting to see how bad it really is, out of fear of over-reacting.

Frankly, that kind of thinking will get kids killed. And probably their families, too.

Once pandemic influenza has been reported anywhere in this country, all schools should be preparing to shut down. Parents, if they are smart, will pull their kids out of any school that doesn't close when the first case is reported in their state. It's that serious.

Officials aren't going to get a second chance to get this right.