In Praise Of The Bug Out Bag

In the vernacular, a `bug-out bag' (BOB) is a bag of emergency supplies, ideally kept at the ready, that one can grab on the way out the door during an emergency.

It isn't supposed to be a survival kit, but rather, to provide the essentials one might need during the first 72 hours of a forced, and sometimes unexpected, evacuation.

Sometimes emergencies occur with some warning, such as with a Hurricane, granting one a few days or hours to prepare. Other times they happen with such suddenness that there is no time to think, no time to prepare. Such as in an earthquake, a tornado, a chemical leak, or even a terrorist attack.

Every year, thousands, sometimes tens of thousands of Americans are forced to leave their homes in emergency evacuations. Most won't be ready.

Which is why everyone should have a BOB outfitted and ready to go. 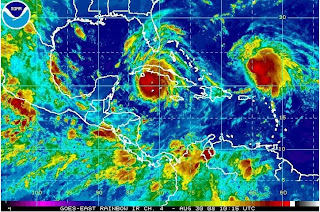 This weekend, with the approach of Hurricane Gustav (that's Hanna on the right, still not quite ready for primetime), many thousands of residents along the Northern Gulf coast will either have their BOB's, or sorely wish they did.

In New Orleans residents are being told to evacuate, and that there will be no `shelter-of-last-resort', such as the Superdome, this time around.

New Orleans plans to get tough on residents who refuse to flee ahead of Hurricane Gustav.

NEW ORLEANS (Associated Press) -- Police with bullhorns plan to go street to street this weekend with a tough message about getting out ahead of Hurricane Gustav: This time there will be no shelter of last resort. The doors to the Superdome will be locked. Those who stay will be on their own.

New forecasts Friday made it increasingly clear that New Orleans will get some kind of hit _ direct or indirect _ by early next week. That raised the likelihood people would have to flee, and the city suggested a full-scale evacuation call could come as soon as Sunday.

Those among New Orleans' estimated 310,000 to 340,000 residents who ignore orders to leave accept "all responsibility for themselves and their loved ones," the city's emergency preparedness director, Jerry Sneed, has warned.

As Katrina approached in 2005, as many as 30,000 people who either could not or would not evacuate jammed the Louisiana Superdome and the riverfront convention center. They spent days waiting for rescue in squalid conditions. Some died.

Stung by the images that flashed across the world, including the photo of an elderly woman dead in her wheelchair, her bodied covered with a blanket, officials promised to find a better way.

This time, the city has taken steps to ensure no one has an excuse not to leave. The state has a $7 million contract to provide 700 buses to evacuate the elderly, the sick and anyone around the region without transportation.

If you think having an emergency bug out bag sounds like something that only a camouflage wearing, gun toting survivalist would have on hand . . .think again.

Here is the advice from Ready.gov. They call is an Emergency Supply Kit, but the idea is the same.

A search of the Internet will find loads of information on BOBs, including some kits so chock full that it would require a pack mule to carry. Some restraint may be required when making a suitable BOB, particularly if you may be forced to carry it.

A bug-out-bag should be a smaller version of a much larger emergency supply that every household should maintain. While a BOB should provide for 72 hours of your family's needs, you should be prepared to stay at home, without outside assistance, for at least 2-weeks.

Many organizations, including some government agencies (US and others) have recommended that up to 3 months of preparations would be prudent, particularly in view of the current pandemic threat.

For more information on how to prepare your household, and your family, to withstand a 2-week or longer crisis visit www.pandemicflu.gov (family checklists) or www.getpandemicready.org.