Today the UK government announced that they had obtained enough of the antiviral drug Relenza to treat all pregnant woman in a `reasonable worst-case' pandemic situation, which they believe would not affect more than 50% of the population.

Less well known than its competitor Tamiflu, Relenza is an inhaled powder and is thought less likely to cross the placenta and adversely affect the fetus.

First the story, from Channel 4 news, then a  discussion of pregnancies and pandemics.

The Government has stockpiled enough anti-viral drugs to treat pregnant women in the event of a flu pandemic, it announced.

A total of 350,000 treatment courses of Relenza have been procured by the Department of Health to treat all pregnant women in a 'reasonable worst case scenario', which would see 50% of them becoming ill during a pandemic.

There are around 635,000 births in the UK every year. Health Secretary, Alan Johnson, announced plans last year to double the stockpile of another anti-viral Tamiflu, so that 50% of the entire population could be covered in the event of a pandemic.

Tamiflu is not suitable for pregnant women because it can easily pass across the placenta to the developing foetus. Relenza is inhaled, which means less of it passes to the baby and it is therefore safe to use, a Department of Health spokeswoman said.

The Department will publish a guide for maternity services this week to help them prepare for a pandemic.

Pregnancy is considered to be a significant risk factor during an influenza pandemic.   Researchers know that during the 1918 pandemic an abnormally high number of pregnant women died from the influenza, and those that survived endured a very high miscarriage rate.

Even during the much milder 1957 Asian Flu, pregnant women reportedly suffered disproportionately higher mortality rates than non-pregnant women of the same age.

The following annecdotal reports come from:

Among 1,350 reported cases of influenza among pregnant women during the pandemic of 1918, the proportion of deaths was reported to be 27% (5).

Similarly, among a small case series of 86 pregnant women hospitalized in Chicago for influenza in 1918, 45% died (6).

Among pregnancy-associated deaths in Minnesota during the 1957 pandemic, influenza was the leading cause of death, accounting for nearly 20% of deaths associated with pregnancy during the pandemic period; half of women of reproductive age who died were pregnant (7).

Pregnant women also appear to be more susceptible to influenza than non-pregnant women, although the exact reasons for this aren't understood.

It is believed, however, that the normal protections of a woman's immune system are temporarily altered to allow her to carry what is essentially a foreign body- a fetus - without rejection.

And that alteration can place the mother (and child) at greater risk of infection during a pandemic.

There is very little hard science available to guide doctors on treating pregnant women with antiviral medications, as well.   While the UK article above states that Tamiflu is inappropriate for pregnant women, and that Relenza is safe, it isn't quite that clear cut.

As is the case with >90% of medications introduced in recent years (35), insufficient information on oseltamivir and zanamivir is available to assess potential risks to the fetus. This is reflected by their category C use-in-pregnancy rating from the US Food and Drug Administration (i.e., insufficient information available to assess their potential risk and benefit during pregnancy) (35).

Animal studies have shown no evidence of increased risk for adverse effects for either medication (36,37), but animal data do not always predict the effects on human pregnancies (35).

The bioavailability (the proportion of active drug that reaches the systemic circulation) of zanamivir is lower (12%–17%) than that of oseltamivir (≈80%) (38), leading some to suggest that it might be preferred during pregnancy (3).

Here in the United States, roughly 4 million women give birth each year.  And like the UK, we have sufficient Relenza stockpiles to treat them during a pandemic.

Antivirals are not a panacea, of course.   They help reduce the effects of influenza, they don't cure it.

Influenza viruses also have a history of quickly developing resistance to antivirals.   Over the past year, the H1N1 seasonal flu has become increasingly more resistant to Oseltamivir.

Three years ago, the H3N2 virus became resistant to Amantadine.  We've no idea how long our current antivirals will work against an emerging pandemic strain.

Hopefully long enough for us to ramp up vaccine production.

But during a pandemic, many nations will be fighting with roughly the same tools and medicines that were available 90  years ago.   And in lesser developed nations pregnant women and children are likely to be hit particularly hard.

In John Barry's The Great Influenza, he writes: 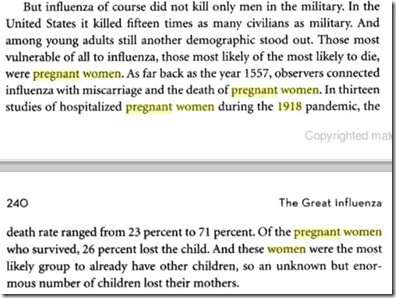 The takeaway message from all of this should be that pregnant women should be getting seasonal flu shots now, to help protect themselves and their unborn child.

Preventing an illness beats trying to treat one.

During a severe influenza pandemic, pregnant women may need to take greater care to use NPI's (Non Pharmaceutical Interventions) and to practice social distancing, given their vulnerability to the virus.  For some pregnant women, voluntary quarantine might even be a consideration.

Like everything else in a pandemic, no solution is ideal, foolproof, or easy to implement.

The entire CDC Journal of EID article, Pandemic Influenza and Pregnant Women is well worth reading.

Posted by Michael Coston at 2:57 PM