The World Health Organization estimates that roughly 2 billion people – nearly 1 in 3 – are infected with the TB bacilli, and of those, 1 in 10 will develop active TB during his or her lifetime.

The incidence of Tuberculosis varies greatly around the world, with North America, Europe and Australia/New Zealand seeing the lowest rates, and with the highest rates found in Africa, India, and Asia. 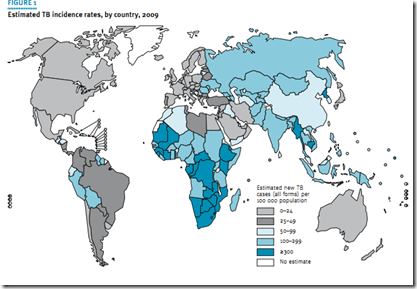 Last year, you may recall, I highlighted the increasing rates of TB in the UK on a couple of occasions.

Last July, in UK: TB Rising we looked at a report on the incidence of Tuberculosis in London, England. This from the Journal of Public Health.

Recent trends in tuberculosis in children in London

Background Childhood tuberculosis (TB) represents a sentinel event of recent transmission and is an indication of the effectiveness of prevention and control interventions. We analysed the trends in the epidemiology of TB in children in London aged 0–14 years between 1999 and 2006.

Conclusions Ethnicity, country of birth and age are important risk factors for development of. With an overall TB incidence in London exceeding 40/100 000, universal BCG immunization of all neonates should be considered across all London boroughs.

In October, in UK: TB `Rife’ in Birmingham, we looked at press reports out of England’s second most populous city proclaiming  UK: "Third World" rate of TB in Birmingham.

While nowhere near the problem that it is in many developing nations, the rate of Tuberculosis has been rising in England steadily for the past decade.

Part of this increase has been due to Immigrants arriving from countries where TB is more prevalent. Although new arrivals are required to have chest X-rays to screen them for TB, that only catches active TB.

TSKs (Tuberculin Skin Tests), are also recommended for certain age groups immigrating from specific countries. These, however, will show positive for those who have received the TB vaccine, or who have been previously exposed (but not necessarily infected), limiting their usefulness.

This from the BBC

Current screening for TB in immigrants arriving in the UK is missing the majority of cases, say researchers.

The genesis of this media report is the following study which appears in The Lancet (free registration req.), that argues that the adoption of blood tests (interferon-γ release-assay (IGRA)) to screen specific cohorts of immigrants for latent TB is both cost effective and will result in earlier treatment for many who unknowingly are infected.

Screening of immigrants in the UK for imported latent tuberculosis: a multicentre cohort study and cost-effectiveness analysis

The blood test in question (IGRA) are whole-blood tests that can often diagnose Mycobacterium tuberculosis infection, in both its  latent form (LTBI) and active tuberculosis (TB) disease.

Unlike the TST (Tuberculin Skin Test), the IGRA (aka. IGT) doesn’t give a false positive in those with prior BCG (bacille Calmette-Guérin) vaccination.

The CDC maintains the following FAQ sheet on the IGRA tests.

It should be noted that the NHS’s  NICE (National Institute of Health and Clinical Excellence) updated their 2006 guidance on screening for TB in March of this year, including the use of the IGRA blood tests. 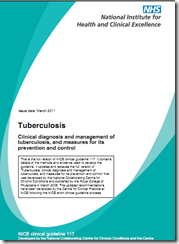 These guidelines are recommendations, and it is up to local NHS agencies to decide whether to adopt them.

They now have the  combined weight of this new guidance, along with the Lancet study, to consider.

Posted by Michael Coston at 6:34 AM