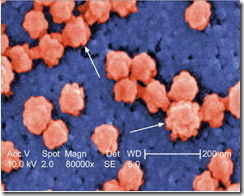 While it may be of relatively little comfort, there are almost certainly a significant number of – as yet – unidentified respiratory viruses that routinely circulate among humans.

Most of the time there is little about their clinical signs and symptoms to suggest anything unusual about the infection. The patient quickly recovers, and the illness is assumed to be due to one of the `usual suspects’;  a seasonal influenza, RSV, or one of the myriad rhinoviruses that plague mankind.

In recent years, however, with advances in microbiology and sequence-independent amplification of viral genomes, the ability of scientists to identify new viruses has improved greatly and so we are adding new names to the `suspect list’.

About a decade ago the human metapneumovirus (HMPV) was identified in Dutch children with bronchiolitis.  Since then, it has been found to be ubiquitous around the world, and responsible for a significant percentage of the world’s respiratory infections . . . yet until 2001, no one knew it existed.

In 2003, a coronavirus called SARS-CoV emerged in China, and infected roughly 8,000 people (killing about 800) before it burned itself out. While coronaviruses were first characterized in the 1960s, and were known to cause many relatively mild upper respiratory infections (common colds) every year, a deadly strain had never been identified before.

Human Bocavirus-infection (HBoV) wasn’t identified until 2005, when it was detected in 48 (9.1%) of 527 children with gastroenteritis in Spain (cite).

But only a small number of virus samples are given this sort of scientific scrutiny, and so it is safe to assume there are still unknown viruses out there, waiting to be discovered.

Most of the time, these viruses have been around for a long time, and classifying them has very little impact on the public’s health.

On very rare occasions, as in the case of SARS, we get a new player; a virus that we’ve never seen before (that we know of).

For the past couple of days there have been media reports out of South Korea that suggest they may be seeing an unusually severe and potentially unknown respiratory virus – and efforts are underway to identify it.

Yesterday, Sharon Sanders of FluTrackers  picked on up early reports of a number of pregnant women in a Seoul Hospital with a `mystery’ respiratory virus.  Since then several more articles (some machine translated) have been posted to this ongoing thread.

These media reports are confusing, incomplete, at times contradictory, and just a little hyperbolic.

Whether there is really anything unusual going on here, is way too soon to tell.   The cause of viral pneumonia often goes unidentified.

That said, the following report comes from the Korea Times.


A woman died from pneumonia caused by an unidentified virus, according to the health authorities.

Fears are rampant as seven others, mostly pregnant women, are hospitalized with the same illness.

The Korea Centers for Disease Control and Prevention said Tuesday that a 36-year-old woman, who had been in the intensive care unit at a Seoul general hospital, died in the morning from a cerebral hemorrhage related to her condition. The unidentified woman was one of seven hospitalized for an unknown viral pneumonia.

Unusually, the woman who died apparently developed rapidly progressing Idiopathic pulmonary fibrosis – a scaring and stiffening of lung tissue without a known cause that normally takes months or years to manifest.

Sifting through the other reports, it appears that these 9 patients:

Whatever this might be (and it may be something perfectly ordinary, presenting in an unusual way), it doesn’t appear to be terribly contagious.

But this is interesting.

And so we’ll keep an eye on it and see if anything of note follows these reports.