Cutting Through The Fukushima Fog 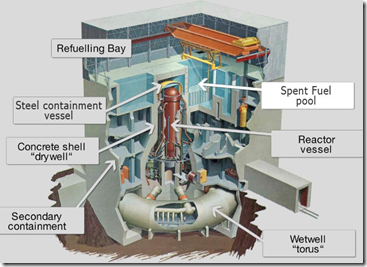 As I noted in The Fog Of Disaster Reporting, written less than 48 hours after the earthquake/tsunami combination that devastated northern Japan, my confidence level in the accuracy of many of the stories coming out of the disaster zone was pretty low.

So low, that in many cases I opted not to use them in this blog.

Since then, we’ve learned that the nuclear accident at the Fukushima Daiichi facility was much worse than first reported.

Despite what we now know was a meltdown of three reactors within hours of the quake, the severity level of the incident was held at a 5 for a full month (the same as Three Mile Island), before being raised to a  Chernobyl-comparable level 7 on April 11th.

Today, the Yomiuri News Agency is reporting that two of these damaged reactors may have suffered a `Melt Through’ – an even more serious event than a meltdown –where nuclear fuel actually melted through the walls or floors of reactor vessel.

Melted Fuel at Fukushima May Have Leaked Through, Yomiuri Says

The panel is expected to produce an interim report by the end of the year, but according to committee's head - Professor Emeritus at the University of Tokyo, Yotaro Hatamura - will not aim to clarify who is responsible for the accident.

Meanwhile, just hours before the first meeting of this expert panel was held, it was revealed that the amount of radiation released from the damaged Fukushima facility during the first week of the disaster was likely more than double what had previously been estimated.

TOKYO — Japan has more than doubled its initial estimate of radiation released from the crippled Fukushima nuclear plant in the week after the March 11 tsunami, ahead of the launch of an official probe Tuesday.

The hits, as they say, just keep on coming.

There are now concerns that the environmental contamination surrounding the plant may be worse than previously suspected, and that people beyond the 20 km evacuation radius may have been exposed to more radiation than previously thought.

These belated and incrementally worsening status reports from plant operator TEPCO and Japan’s Nuclear Safety Commission probably won’t do a lot to inspire confidence in their future pronouncements.

Of course, early reports from the ground during any major disaster are usually fragmentary, often misleading, and occasionally just downright wrong.

How much of this `bad information’ is due to attempts to `manage’ the crisis by doling out bad news a piece at a time – and how much comes from a genuine impenetrable `fog’ of disaster – is hard to know.

Often it is a mixture of both.

But as was noted last month in  Sandman & Lanard On Worst-Case Crisis Communications, it is important for officials to get out in front of any crisis.

Telling the truth and telling it early, are key points to effective crisis communications.

Simple advice, yet it is often ignored.

The main communication problem results from the public’s inability to know how much of the situation is under how much control, and what might happen if things get worse. Japanese officials have not helped us to understand that.

In an excerpt from the section on “Announcing early”, it states:

People are more likely to overestimate the risk if information is withheld. And evidence shows that the longer officials withhold worrisome information, the more frightening the information will seem when it is revealed, especially if it is revealed by an outside source….

Early announcements are often based on incomplete and sometimes erroneous information. It is critical to publicly acknowledge that early information may change as further information is developed or verified.

For anyone even remotely involved as a spokesperson for an agency, organization, or company during a crisis, their site should be viewed as essential reading.


Unfortunately, the stream of continually revised information coming out of Japan over the past three months appears more akin to the hoary old tale of the wealthy Englishman who, after traveling the world for many months, called home and spoke to his butler.

"Well James, has anything happened in my absence?"

"From the stables, Sir. They burned to the ground two weeks ago."

"How did the stables catch fire?"

"Probably flames from the house, sir."

"The house burned down too!  How did that happen?

"We suspect the drapes caught fire from the candles, sir."

"Candles!  We have electricity. Why on earth were you using candles?"

"They were around your mother's coffin in the parlor, sir."

"Mum is dead!  My God James, what happened!"

"Well Sir, we suspect it was from the shock of your wife running off with the gardener . . ."

You get the idea.

While the exchange above may make for good comedy, any semblance of it in the real world makes for lousy crisis communications.

Posted by Michael Coston at 7:05 AM