Earlier this year I wrote about the rise of measles cases across much of Europe (see Measles: Forgotten, But Not Gone), with details gleaned from the WHO’s WER (Weekly Epidemiological Record). Along with it, I included a referral to an excellent 5-part series on measles by Ian York.

The WER report (Measles outbreaks in Europe) detailed an outbreak, which had – as of April 18th –had infected more than 6,500 people in 33 nations.

Since then, the numbers have continued to rise, with more than 28,000 cases reported across the EU as of September 1st of this year. 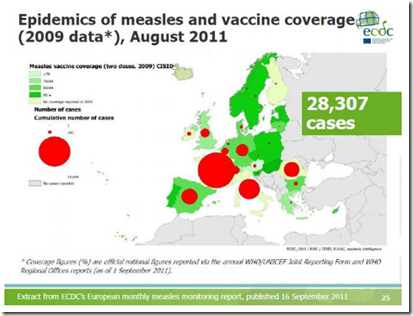 Yesterday at his annual hearing with the European Parliament’s Committee on the Environment, Public Health and Food Safety, the ECDC’s director called for the eradication of measles to be a major theme in 2012.

At his annual hearing with the European Parliament’s Committee on the Environment, Public Health and Food Safety, ECDC Director Marc Sprenger described the resurgence of measles in the EU as “one of the major events of this new decade”.

Dr Sprenger highlighted the major epidemics in some of the EU’s richer Member States, stating that fighting measles is not just about resources. “It is also about attitudes, priorities and leadership”. Dr Sprenger said “leadership in the fight against measles needs to come from Europe’s health professionals". He noted that it is crucial for paediatricians and family doctors to give balanced, evidence-based information to help parents decide on vaccinations.

Over the spring and summer a significant number of measles cases were imported into the United States from this outbreak, prompting the CDC to release a HAN ADVISORY on measles in late June.

Measles was considered eliminated in the United States by the year 2000 due to the introduction of the measles vaccine in the mid-1960s. 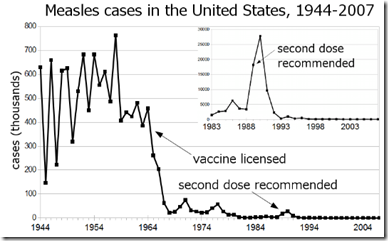 Despite this success, there remain enough unvaccinated individuals to create cracks in our hard won `herd immunity’, and that can allow the virus an opportunity to spread.

And in developing countries, the incidence – and mortality rate – of measles remains high.   These statistics from the World Health Organization: