As of November 29th, 2011 the World Health Organization has logged 571 confirmed human infections with the H5N1 virus, with 335 deaths. The case fatality rate (CFR) – based on the numbers we know – is a staggeringly high 58.6%. 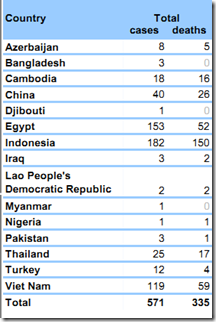 Mash up of WHO data

But most observers will grant that these totals are not likely to represent the entire burden of the H5N1 virus in humans around the world. As with any other illness or disease, surveillance is imperfect, and not every case is counted.

Surveillance across much of Asia and the Middle East - where the virus is known to be endemic - is spotty at best, and many countries do not have the laboratory facilities, budget, or political will to adequately screen for the virus.

It has been suggested that the reason the CFR of this virus is perceived to be so high is because milder cases are more likely to go unrecognized or unreported.

And while that sounds reasonable, without evidence of a substantial number subclinical or mild infections, you can’t just leap to that conclusion.

Finding that evidence would be a good news-bad news proposition.

The good news is that it would reduce the CFR of the virus, albeit perhaps not by a lot.

The bad news is that it could indicate the virus is slightly better adapted to human physiology than we currently believe, and that it might even be transmitting at low levels.

Last night CIDRAP News carried a small summary of a letter that appears in the Dec. 5th Clinical Infectious Disease Journal that reported on the detection of several villagers in and around Beijing, China who showed serological evidence of prior infection by H5 and H9 avian viruses.

The link to the letter follows:

The CIDRAP news summary of this letter can be read at the following link:

Chinese researchers identified several villagers who didn't handle poultry to be seropositive for avian flu, including a man who tested seropositive for two strains, according to their letter in Clinical Infectious Diseases yesterday.

They conducted a serologic analysis of 605 Beijing-area residents, randomly selected from 24 villages ,who did not have a history of handling poultry. The investigators found antibodies against H9 avian flu by hemagglutination inhibition assay in five of the villagers, and one of these, a 55-year-old man, also tested positive for H5 antibodies.

Admittedly, these numbers are pretty low.

Less than 1% tested positive for prior exposure to H9 avian flu, and only one showed evidence of H5N1 infection.

But they do validate that some degree of undetected human infection by these avian influenza viruses have occurred  - and they have happened in the general population - not just in those with frequent poultry exposures.

While serological studies like this are rare, we have seen other research over the past couple of years suggesting that both H5N1 and H9N2 have caused silent, or unreported, infections in humans.

In September of this year we saw a study that reported the results of this kind of serological testing conducted in a rural village in Thailand in 2008 (see Bangladesh To Share H9N2 Bird Flu Virus).

Last May, in EID Journal: Unraveling Pakistan’s H5N1 Outbreak, we looked at a study that suggested that the actual number of human cases in the 2007 Pakistan cluster was higher than reported.

From the abstract, the authors write:

Human infection with avian influenza (H5N1) virus raises concern for the possibility of a pandemic. We report 20 cases, which ranged from asymptomatic to fatal, in Pakistan in 2007.

These cases indicate human-to-human-to-human transmission of this virus, and the number of cases may be higher than realized.

In May of 2009 (see Cambodian Study Finds Rare Asymptomatic H5N1 Infections) we saw a seroprevalence study published in the Journal of Infectious Diseases  conducted on more than 600 members of a Cambodian village where 2 human H5N1 cases were detected in 2006.

Antibody titers showed that only 1% (7 of 674) of the villagers tested had contracted, and fought off, the H5N1 virus.   A figure much lower than many had expected.

Another study – presented at the Options For Influenza Control VI  Conference in Toronto in 2007, came up with similar results (see Seroprevalence Study).

So far, all we have are a few ragged pieces of this serological puzzle, gleaned over a period of several years from a handful of countries, and involving extremely small population samples.

All of which makes it impossible to draw any firm conclusions.

For the glass half-full crowd, these studies do suggest that mild or subclinical infections by these avian viruses – while not particularly common –  can occur. And that may moderate the CFR somewhat.

For the glass half-empty contingent, the number of subclinical cases may not be enough to lower the CFR as much as some have hoped, and their detection – even these at low levels – raise concerns over the eventual adaptation of these viruses to humans.

What is sorely needed are more detailed serological studies, both among the general population where these viruses are endemic, and among close contacts to known H5N1 and H9N2 infections.

But these studies are expensive, difficult to mount due to geographic, societal, political and religious reasons, and are further complicated by the existence of least 20 genetically separate clades of the H5N1 virus, with many minor variants of each clade thrown in the mix.

Without better data, public health officials are forced to make vital decisions regarding the pandemic potential of H5N1, H9N2, and  many other novel viruses based on incomplete information.

Which is hardly an enviable position for a world that is unlikely to have much in the way of immunity to a future pandemic caused by one of these emerging influenza strains.

Posted by Michael Coston at 8:44 AM