NDM-1: A Matter Of Import 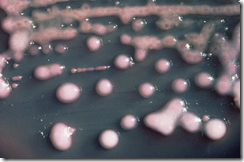 It’s been nearly 2 years since The Lancet published a study (see NDM-1: A New Acronym To Memorize)  by Walsh, Toleman, Livermore, et al. on the emergence and growing prevalence a new enzyme – dubbed NDM-1 (New Delhi metallo-ß-lactamase-1) - on the Indian sub-continent that can confer resistance to certain gram negative bacteria like E.coli and Klebsiella against a class of antibiotics called carbapenems.

Carbapenems are newer generation beta-lactam antibiotics (a class that includes penicillins, cephalosporins, cephamycins, and carbapenems) that are usually reserved as an antibiotic of last resort.

Of particular concern, this enzyme is carried by a plasmid – a snippet of portable DNA  - that can be transferred to other types of bacteria (see Study: Adaptation Of Plasmids To New Bacterial Species).

While the numbers were small, the authors identified a handful of patients in the UK who had recently travelled to the Indian Subcontinent and who returned with this resistant bacteria.

The reaction from officials out of India was both swift and disappointing. Rather than taking immediate action against a growing public health threat, they took umbrage instead.

They condemned of the use of `New Delhi’ in the naming of this resistance gene, called the paper a `conspiracy theory’, and issued broad denials of its prevalence in India or that medical tourism to their nation was responsible for its spread.

Under mounting pressure from the International community and editorializing in Indian newspapers, the Indian Health Ministry announced in October 2010 that they would impose new restrictions on the sale of 90 currently over-the-counter antibiotics.

But as the Deccan Chronicle reported as recently as last month, in an article called Medical body demands ban on 33 drugs in India (published May 20, 2012), little progress has been made:

Sale of antibiotics without prescription is rampant

Despite the government regulations restricting the sale of drugs without a prescription, medical stores continue to do so in the absence of active government monitoring. In particular, antibiotics can be obtained at medical stores just by naming them. Doctors say such an unchecked sale of antibiotics is harmful from the public's perspective.

Even though the policy framework of the Directorate General of Health Services seeks to regulate the unauthorised sale of antibiotics, the practice is rampant.

Six months after the first Lancet article - in April, 2011 - the same researchers published another study that found the NDM-1 enzyme in 4% of New Delhi’s sampled drinking water sources, and 30 per cent of the sewage tested.

Dissemination of NDM-1 positive bacteria in the New Delhi environment and its implications for human health: an environmental point prevalence study

And most alarmingly, the researchers also identified 11 new species of bacteria carrying the NDM-1 gene, including strains which cause cholera and dysentery.

Today the VOA (Voice of America) carries a report on the growing concerns over the spread of Drug Resistant bacteria across India. A problem exacerbated not only by the unregulated sale of antibiotics over the counter, but also by a lack of waste treatment facilities in that country of more than 1 billion people.

Medical research is once again pointing to India as a dangerous crucible of bacterial strains that resist many forms of antibiotic treatment. Cheap, under-regulated antibiotics and a severe shortfall of sanitation infrastructure fuel the problem.

Unsanitary conditions in India are blamed for creating an environment for superbugs - both in emerging megacities, and in rural locations where toilet infrastructure is nearly nonexistent.


"India has a capacity to treat only about a fifth of its sewage and I think about 40 percent of that capacity is concentrated in just two cities of Delhi and Bombay," said Jacob.

More detail on the Excreta Matters study, referenced above, can be found on the Centre For Science and Environment website. 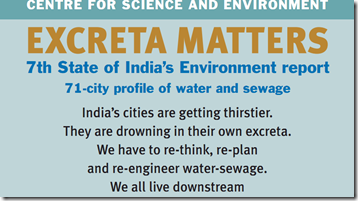 Meanwhile, as governments dither and regulations go unenforced - superbugs like NDM-1, acinetobacter, and a myriad of carbapenamases including: IMP, VIM, OXA, CMY, and most notably KPC (K. pneumoniae carbapenemase) - continue their pernicious spread around the world.

A story out of Edmonton, Canada last week illustrates this point, showing just how easily superbugs can be imported, and then spread:

Weeks after two types of drug resistant bacteria were brought into Edmonton by a woman who had surgery overseas, health officials have confirmed those `superbugs' lead to the death of another patient at the Royal Alexandra Hospital.

Short of seeing an extremely high mortality influenza pandemic, I can think of no looming medical crisis more dire than the growing threat of antimicrobial resistance. The World Health Organization, the ECDC, and the CDC all consider the spread of antibiotic resistant organisms to be an extremely urgent public health concern.

For more on these issues, you may wish to revisit:

WHO: The Evolving Threat Of Antimicrobial Resistance

And Maryn’s SUPERBUG Blog, part of Wired Science Blogs, continues to provide the best day-to-day coverage of these issues.

Posted by Michael Coston at 9:36 AM