WHO Update On Cambodian Outbreak 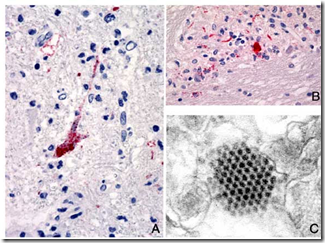 Yesterday it was disclosed that samples from 15 of 24 victims of the `mystery illness’ which has claimed dozens of children’s lives in Cambodia tested positive for the EV71 virus, a common cause of more severe forms of HFMD (Hand Foot & Mouth Disease).

While the EV71 virus is now a prime suspect, additional testing is underway, as well as investigations into why this particular outbreak proved so deadly.

Today the World Health Organization has posted an update on their GAR (Global Alert & Response) page:

9 July 2012 - As part of the continuing investigations into the undiagnosed illness, the Ministry of Health of the Kingdom of Cambodia is finalizing the review of all suspected hospitalised cases. This final review added an additional two cases between April to 5 July 2012, making the total number of children affected to be 59. Of these, 52 have died.

The age of the cases range from three months to 11 years old, with the majority being under three years old. The overall male: female ratio is 1.3:1.

Laboratory samples were not available for the majority of the cases as they died before appropriate samples could be taken.

Based on the latest laboratory results, a significant proportion of the samples tested positive for enterovirus 71 (EV-71), which causes hand foot and mouth disease (HFMD). The EV-71 virus has been known to generally cause severe complications amongst some patients.

Additionally, a number of other pathogens, including dengue and streptococcus suis were identified in some of the samples. The samples were found to be negative for H5N1 and other influenza viruses, SARS and Nipah.

Further investigations into matching the clinical, laboratory and epidemiological information are ongoing, and are likely to be concluded in a few days.

WHO and partners, which include lnstitut Pasteur du Cambodge and US Centers for Disease Control and Prevention, are assisting the Ministry of Health with this event.

The Government is also reinforcing awareness of good hygiene practices to the public, which includes frequent washing of hands.

There is speculation that the administration of steroids may have masked some of the more common symptoms of HFMD (notably, the blistering rash) thereby complicating the diagnosis.

EV71 has been a frequent topic in this blog over the years since it appears to present a growing threat across Asia, and there is no reason to suspect it couldn’t migrate to other parts of the globe.

For some earlier blogs on this virus and some of the outbreaks it has caused, you may wish to revisit:

Posted by Michael Coston at 9:48 AM