As someone who contracted Lyme Disease 20 years ago, I’ve a deep and abiding interest in all manner of vector borne diseases.

I’ve also developed an understandable revulsion to being around ticks . . . but that’s another matter.

Today, we are learning of a new, novel virus detected in northern Missouri, again presumably carried by ticks. The lone star tick (Amblyomma americanum) is a prime suspect, but other ticks may carry it as well.

While there is a lot we don’t yet know, the following report appears today in the NEJM.

A New Phlebovirus Associated with Severe Febrile Illness in Missouri

Two men from northwestern Missouri independently presented to a medical facility with fever, fatigue, diarrhea, thrombocytopenia, and leukopenia, and both had been bitten by ticks 5 to 7 days before the onset of illness. Ehrlichia chaffeensis was suspected as the causal agent but was not found on serologic analysis, polymerase-chain-reaction (PCR) assay, or cell culture.

Electron microscopy revealed viruses consistent with members of the Bunyaviridae family. Next-generation sequencing and phylogenetic analysis identified the viruses as novel members of the phlebovirus genus.

Although Koch's postulates have not been completely fulfilled, we believe that this phlebovirus, which is novel in the Americas, is the cause of this clinical syndrome.

Phlebovirus are part of the family Bunyaviridae, which includes such nasties as Crimean-Congo hemorrhagic fever, Hantaviruses, and Rift Valley Fever. There are more than 300 known Bunyaviruses.

Luckily for us, not all of them infect humans.

Bunyaviruses  are mostly spread via arthropod vectors (ticks, mosquitoes & sand flies), with the exception of Hantaviruses (see Hantaviruses Revisited), which are spread via the feces and urine of rodents.

Given that two cases showed up, hailing from 60 miles apart - and with no epidemiological links - it is likely that more cases will be found now that doctors know what to look for.

Dick Knox at NPR has a good report on what the CDC has dubbed `The Heartland Virus’, named after the Heartland Regional Medical Center in St. Joseph, Mo which alerted the CDC back in 2009 about these cases.

When you consider the wide panoply of  diseases carried by ticks - Lyme disease alone is considered responsible for 20,000+ infections each year (MMWR Lyme Disease --- United States, 2003—2005) – it makes sense to avoid tick bites whenever possible.

This from the Minnesota Department of Health. 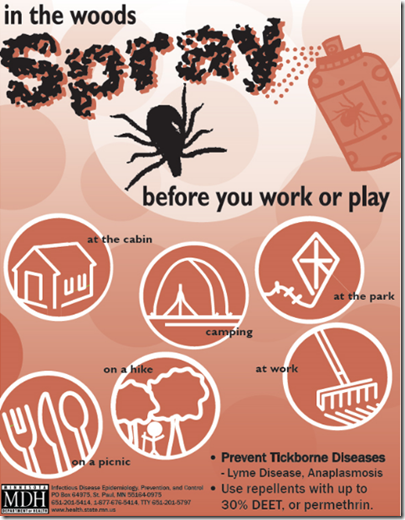 While it is a good idea to take preventive measures against ticks year-round, be extra vigilant in warmer months (April-September) when ticks are most active.

Repel Ticks with DEET or Permethrin

Find and Remove Ticks from Your Body