Very early in the H7N9 outbreak Dr. Ian M. Mackay from the University of Queensland in Australia – via his blog, Virology Down Under – began a concise and valuable webpage called Avian influenza A virus H7N9.

One of the highlights was his chart showing onset dates of illness, which shows a clear explosion of cases beginning around the 18th of March.  An early version (Apr 4th) looked like this. 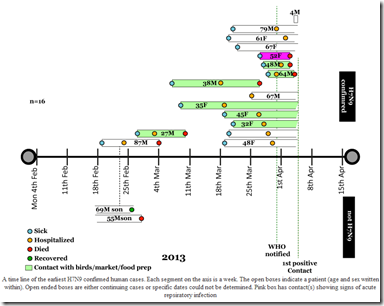 The number of new cases has nearly quadrupled over the past 10 days, making the old format increasingly unwieldy. Today, Ian re-launched this graph in a more space saving (and easier to maintain) format.


With today’s new cases already input, here is the new chart design.  Click to graphic below to go to his site to view the larger version. 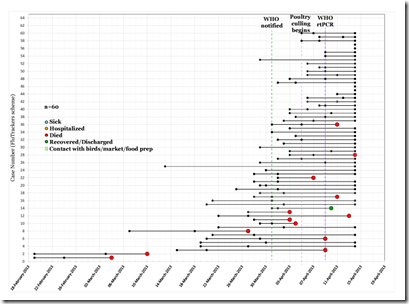 Another of Ian’s charts shows the age distribution among known cases, which clearly shows the disproportionate impact this virus is having on those over the age of 40.

While seasonal influenza viruses usually have a greater impact on older patients, novel flu viruses – for which there exists little or no community immunity – would be expected to affect the whole age spectrum.

One possible explanation: We are only seeing the sickest patients captured by surveillance; older patients with pre-existing medical conditions who are most likely to have complications from the flu and are hospitalized.

For this to be true, if would follow that there are a large number of mild, undiagnosed cases out there.

Certainly possible (perhaps even likely), but for now, there is no hard data to support that idea.

There’s a lot more to glean from Ian’s site, including his discussions of the denominator problem, transmission of the virus, genetic sequencing, additional charts, graphs, and maps, and his list of question we need answers to.

Dr. MacKay updates this site frequently, and it is on my list to check several times each day.  As it should be on yours.