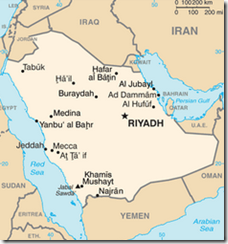 While the welcomed weekend communications by Dr. Ziad Memish – KSA’s Deputy Minister of Public Health - have added valuable line listing details on their coronavirus cases, our understanding of the scope of that outbreak remains very limited.

The sparse epidemiological comments he’s provided so far suggest some degree of human-to-human transmission has occurred and ties that to a single single health care facility.

But an article overnight by respected journalists Ellen Knickmeyer and Betsy McKay in the Wall Street Journal, and some hard-to-decipher translated Arabic news items on FluTrackers, raise questions over exactly what is going on with this outbreak.

Our first stop, the WSJ piece, which quotes a hospital's executive director as confirming that some coronavirus cases were being treated at his facility, but denying that his facility was the only one treating coronavirus patients.

If his statements are accurate, this would suggest a bigger problem than the Saudis are currently owning up to.

By ELLEN KNICKMEYER in Hofuf, Saudi Arabia, and BETSY MCKAY in Atlanta

Saudi Arabia's announcements in the past five days of seven new deaths from a SARS-like virus have heightened fears that the Mideast outbreak is entering a more-aggressive phase.

On Monday, security guards, their faces covered by green medical masks, stood watch outside the intensive-care unit at a small hospital in Hofuf, in the country's Eastern province, that is treating some of the victims in the most lethal surge yet of the year-old outbreak of a novel coronavirus.

Other reporting in Arabic papers – which suffer greatly from the limitations of machine translation – paint a confused picture as well.

Caveat: Given the cryptic nature of machine translations in general, I have deep reservations over drawing too much from these type of reports, so I present them without endorsement.

One such report, captured and translated last night on FluTrackers, mentions a press conference held by the KSA’s MOH, where they supposedly announced the virus had picked up `three-gene mutations, suggesting that there is a shift in the virus’.

This article also mentions multiple hospitals in regards to this outbreak, but the translation is so syntax-challenged, I’d be reluctant to draw any firm conclusions from it.

There are also reports of wild rumors, and of panicked parents keeping kids home from school, and the worried well showing up at hospitals.

So we are left with a lot of questions, and very few answers.

I certainly don’t pretend to know the answer to any of these questions.

We may simply be seeing a public relations backfire created as a direct, and 100% foreseeable, consequence of an overly secretive Saudi risk communications policy.

If there’s one thing you can count on in a crisis, it’s that rumors and speculation will rush in to fill any information void.

The other possibility is that this outbreak is somehow substantially worse than we are being told. But if that’s true, it seems unlikely that they could keep it hidden for very long.

Which puts us in a watchful waiting mode, looking for any indication – one way or the other – of how this outbreak is playing out.

Posted by Michael Coston at 7:54 AM