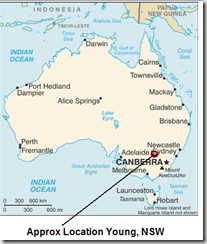 An update to Tuesday’s report of avian flu at a poultry farm in New South Wales, Australia (see NSW: H7 Avian Influenza Reported In Poultry), we now know that the virus has been identified as HPAI (highly pathogenic) H7N2 and the decision has been made to cull 400,000 birds and destroy upwards of 3,000,000 eggs.

The latest update from the NSW DPI reads:

Avian Influenza confirmed in an egg production flock near Young

H7 Avian Influenza has been confirmed in a flock of 400,000 layer hens near Young.

This is not the highly pathogenic H5NI strain that has gained worldwide attention – nor is it closely related to that strain.

The egg farm has been placed under strict quarantine and movements on and off the property are being controlled.

More than 18,000 chickens on the site died as a result of the virus.

Agreement has been reached on the eradication of the virus and the depopulation of the remaining birds has now commenced.

The Department of Primary Industries and the Livestock Health and Pest Authority are continuing surveillance and tracing to confirm the virus has not spread.

If you notice sick or dead birds you need to contact your local veterinarian or call the Emergency Animal Disease Watch Hotline 1800 675 888.

Amid the testing and quarantine at this poultry facility, a bit of a kerfuffle has erupted between the media and government officials over the lack of quarantine signage at the farm, and alleged `trespassing’ by reporters after being told not visit the farm.

DPI confirms chickens will be destroyed

New South Wales Department of Primary Industries chief vet, Ian Roth tells Michael Condon that more than 400,000 chickens will be destroyed after a bird flu outbreak on an egg farm near Young, and responds to reports that the DPI didn't erect 'keep out' signs on the property as soon as it was quarantined.

Director of the CSIRO's Animal Health Laboratory, Kurt Zuelke explains to Lucy Barbour how his team tested and confirmed the H7 avian influenza found on an egg farm near Young, in south-west New South Wales.

Although human infection with H7 avian influenza isn’t unheard of, it has been fairly rare and the risk to the public from these avian viruses is generally considered low.  The exception to this rule being the recently emerged H7N9 virus in China, which has proven unexpectedly pathogenic in humans.

On October 7th, the World Health Organization  published an updated Influenza at the human-animal interface Summary and assessment,  which contained the following risk assessment on H7 avian viruses in response to the recent report of 3 poultry workers in Italy contracting H7N7 ( ECDC Update & Assessment: Human Infection By Avian H7N7 In Italy).

Influenza A(H7) viruses have been detected in poultry populations in many countries throughout the world. Occasionally, human cases of infection with A(H7) viruses have been detected, mainly in people directly exposed to infected poultry or contaminated environments. Generally, these infections cause conjunctivitis or mild influenza like illness, however in rare cases of human A(H7) infections, notably with A(H7N9), severe and fatal disease was reported.

Overall public health risk assessment for this influenza A(H7N7) virus: Further human cases and small clusters may be expected if the virus continues to circulate in poultry. The current likelihood of community level spread of this virus is considered low.

Any country experiencing outbreaks of influenza virus infection in animals should implement appropriate biosafety measures to protect people working with or living nearby infected and potentially infected animals. Collaboration with animal health partners is necessary to optimally control this disease and decrease risks to public health.

Close monitoring of people at risk (cullers, people working on affected farms, veterinarians) and their close contacts is warranted to detect potential human to human transmission.

For more on H7 avian viruses in general, you may wish to revisit last March’s Brief History Of H7 Avian Flu Infections.

Posted by Michael Coston at 8:39 AM