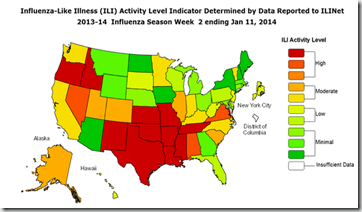 Although seasonal flu comes around each year, every flu season has a distinct `personality’ as the various flu strains struggle for dominance, and accumulated antigenic drift aids in their ability to evade community immunity.

Some flu seasons are relatively mild (like 2011-2012), while others are more severe (like 2012-2013).  And the preferential target of these viruses shift from year-to-year as well, something we saw during 2009 H1N1 pandemic, which had its greatest affect on those under the age of 65.

This year – for the first time in 3 years – we are seeing the pH1N1 virus (introduced in the 2009 pandemic, but now a seasonal strain) the major player in North America, and as that strain tends to hit younger people harder.  As a result we’ve seen a good deal of media coverage of young adults hospitalized and some even dying from the flu. 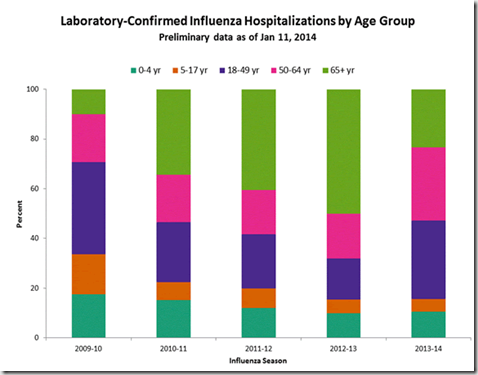 The above chart shows how much less this year’s flu is affecting those over 65 (green) than it did last year, with those aged between 18 and 64 representing the bulk of this year’s hospitalizations.

Despite this distressing age shift towards younger patients, the absolute numbers for week 2 of this year are less severe than they were this time last year.

First, a brief summary of week 2’s activities from the CDC, then I’ll have some side-by-side comparisons of this week vs 1 years ago.

With the caveat that different flu seasons peak at different times, and that there may be a good deal more flu ahead before the end of spring, I’ve compared this year’s flu season through week two with last year’s in the charts below. 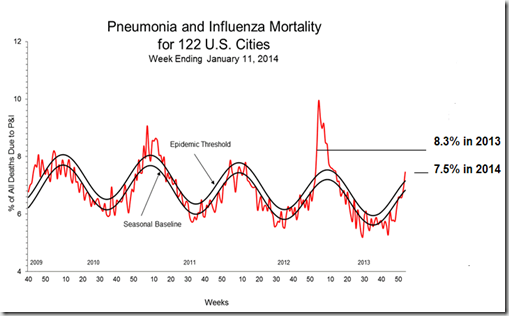 The P&I Mortality rate has – for the first time this flu season – exceeded the epidemic threshold.  It is, however, considerably lower than it was this time last year (and last year reached a 10 year peak in late January). 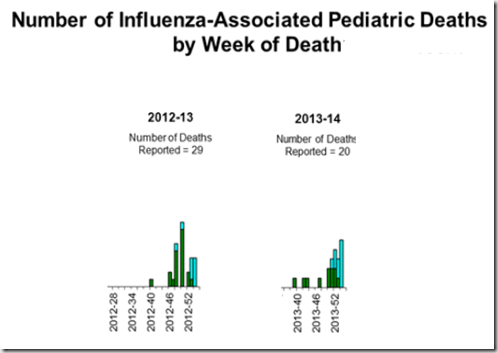 Pediatric deaths are often slow in being reported, and right now, the 2014 season is lagging only slightly behind last year’s number for week 2.  In an average year we generally see around 75-125 pediatric deaths reported. 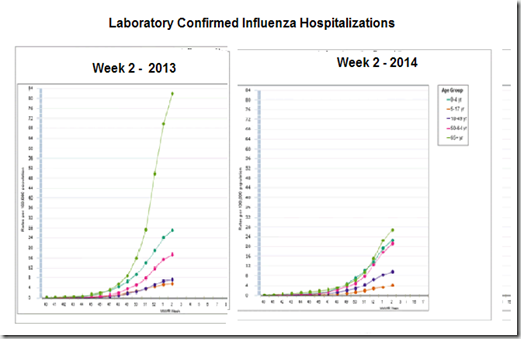 The most dramatic side-by-side comparisons comes from hospitalizations from influenza by age group.

The take-away from all of this is that influenza is not a trivial illness, and even during an average year, it can claim thousands of lives.  Some years – like this year – we see younger people more affected.  We won’t know how this year’s flu season will stack up against previous years until the season is over, and the number are tallied.

Regardless of the strain of flu in circulation, you are much better off avoiding infection rather than treating it. So while it may only provide moderate protection, getting the flu shot each year is cheap insurance.

That, and following good flu hygiene practices (covering coughs, washing hands frequently, staying home when sick, avoiding close contact with those who are sick),  are your best defense against our yearly flu epidemic.