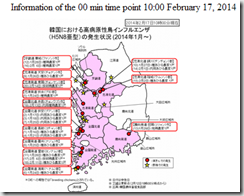 It’s been exactly  a month since we first learned South Korea’s H5N8 outbreak - affecting both wild birds and poultry – but thus far, not humans.

Although previously seen in a low pathogenic form (see CIDRAP 2008 Low-pathogenic avian flu hits Idaho game farm), at least one detection of H5N8 in an HPAI form was recorded in China in 2009-10 (see Characterization of three H5N5 and one H5N8 highly pathogenic avian influenza viruses in China).

Despite intensive containment measures, disinfection and culling of farms, and the halting of poultry product transport, the virus has continued to spread across much of the South Korean Peninsula over the past 30 days.   Today,  a couple of reports indicating that the battle being waged is far from over.

From the Korean JoongAng Daily.

Avian influenza continues to spread despite efforts to control it, including the culling of more than four million ducks and chickens.

Bird flu now threatens the Seoul metropolitan area, with another confirmation of the H5N8 strain at a duck farm in Anseong, Gyeonggi, yesterday, the third outbreak in the province.


Some 7,000 ducks at the farm and more than 100,000 chickens and ducks at six other farms within a three-kilometer (1.8-mile) radius were culled yesterday to prevent the spread of the disease.

And this report from KBS World.

North Jeolla Province has confirmed ducks at a farm in Gimje tested positive for a highly pathogenic strain of bird flu.

The latest infection is stirring up fears of a renewed spread of the bird flu after signs of the epidemic letting up in North Jeolla Province.

In 2011 we saw the massive spread of another avian flu – H5N1 - across much of South Korea, resulting in the culling of more than 5.5 million birds on nearly 250 farms (see South Korea: Two New Bird Flu Outbreaks Reported).  At the time migratory birds were blamed for the introduction of that virus into the poultry industry.

Although Korean officials have been quick to blame Migratory birds for bringing the virus to their country, and spreading it between farms, not everyone is in agreement (see  Korea: H5N8 Spreads, Debate Over Source Intensifies).

Despite a degree of uncertainty regarding its mode of dispersal, given the flight paths of migratory birds that are currently overwintering on the Korean peninsula (see map below), Japan and other countries are on heightened alert for any signs of H5N8’s arrival on their shores. 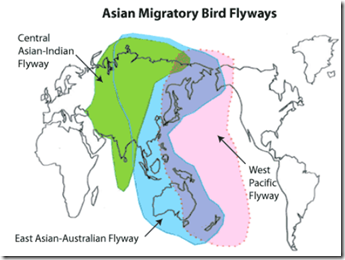 How H5N8 will eventually interact with other flu viruses, and various hosts, is something we will have to wait to see.

But the unexpected appearance of this avian virus last month is further proof (as if we needed it) that Nature’s laboratory is open 24/7, is constantly coming up with new viral and bacterial threats, and that we need to improve not only our surveillance, but our biosecurity measures, if we hope to keep them at bay.