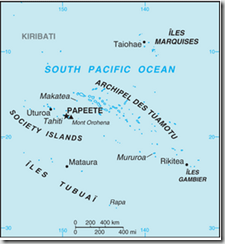 Increasingly arboviruses (those transmitted by mosquitoes, ticks, biting flies, etc) are viewed as a growing public health threat – not just in those tropical regions where they are often endemic – but also in North America, Europe, and Australia.

In recent years West Nile Virus has invaded and spread widely across North America, Dengue fever has gained a tentative foothold in both Southern Florida and Texas, and with a growing Chikungunya outbreak in the Caribbean (see last week’s COCA Call On Chikungunya) many epidemiologists believe that it may be only a matter of time before it spreads to the United States.

There are other, even more exotic viral fevers to be concerned with, including Rift Valley Fever, Yellow Fever, Japanese Encephalitis, and one that perhaps,  few people have  heard of; the Zika Virus (ZIKAV).

Zika Fever, which is spread by the Aedes Mosquito, was first identified in Uganda in 1947, but has in recent years spread into parts of Asia and the South Pacific.

While generally regarded as  a `mild’ disease, we only have a limited amount of experience with large outbreaks.

In 2009, the CDC’s EID Journal carried a report called Zika Virus Outside Africa by Edward B. Hayes that focused on that virus’ recent arrival in the Yap Islands of the South Pacific, where it quickly spread to roughly 70% of the island’s inhabitants. 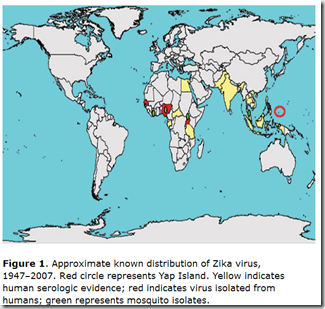 While most cases had reported relatively mild symptoms, the author cautioned that until the WNV began causing neuroinvasive symptoms in Romania and North America, it too was considered a fairly innocuous viral infection.

In 2011, the EID Journal carried a remarkable Dispatch on the first Probable Non–Vector-borne Transmission of Zika Virus, Colorado, USA, involving two researchers infected in Africa, one of whon returned to the Untied States and passed the virus (presumably via sexual contact) to his wife.  This was the first instance where sexual transmission of an Arbovirus was suspected, the author’s writing:

Results also support ZIKV transmission from patient 1 to patient 3. Patient 3 had never traveled to Africa or Asia and had not left the United States since 2007. ZIKV has never been reported in the Western Hemisphere. Circumstantial evidence suggests direct person-to-person, possibly sexual, transmission of the virus.

In recent months French Polynesia has been dealing with an outbreak of both Zika and Dengue, prompting the CDC  to issue a travel watch notice:

The French Polynesia Department of Health has confirmed an outbreak of Zika fever in the islands of Tahiti, Moorea, Raiatea, Tahaa, Bora Bora, Huahine, Nuku Hiva, Hiva Oa, Ua Pou, Hao, Rangiroa, Fakarava, Tikehau, Takaroa Ahe and Arutua. As of February 7, 2014, 396 laboratory confirmed cases and 8,262 suspected cases have been reported. No deaths have been reported. The Department of Health is working to improve surveillance.

What is Zika fever?

Zika fever is an illness caused by a virus that spread through mosquito bites. It is closely related to dengue virus and causes a similar illness. Symptoms of Zika fever may include fever, headache, red eyes, rash, muscle aches, and joint pains. The illness is usually mild and lasts 4-7 days.

Who is at risk?

Travelers who go to certain places in Africa, Asia, and the Western Pacific are at risk of getting Zika virus (see map). The mosquito that carries Zika virus can bite during the day and night, both indoors and outdoors, and often lives around buildings in urban areas.

All of which brings us to the most recent report from Le Centre d’Hygiène et de Salubrité Publique  (CHSP) in French Polynesia updating their Dengue, Zika Virus outbreak situation, along with an accompanying large number of Guillain Barre Syndrome (GBS) and autoimmune cases.

Bulletin surveillance is issued every Friday by the Bureau of Health Intelligence Directorate of Public Health. It shows the weekly evolution of the main syndromes associated with infectious diseases in the country, as well as laboratory-confirmed dengue and influenza. It also provides information on local, regional epidemiological events, and international related to these pathologies or other epidemic problems (diarrhea, leptospirosis, ..). This newsletter is intended primarily for health professionals.

Week 08 to come and on the situation in February 21, 2014 Outbreak of dengue and zika current

(02/21/2014) SUSPECTED OF NEUROLOGICAL COMPLICATIONS OR AUTOIMMUNE

Balance sheet as at 21 February (Figure 3): 74 cases of complications

Of the 41 cases of GBS, 4 patients are still hospitalized in intensive care and 14 are currently in the center of rehabilitation Te Tiare. No deaths occurred.

Investigations are currently underway to identify the causes of this increase in cases of GBS and other autoimmune manifestations to determine the possible association with outbreaks of dengue 1, dengue 3 andzika that simultaneously affect French Polynesia.

Guillain-Barre Syndrome (GBS) is a neurological disorder with a background rate – at least in the United States and Europe – of about 1 in every 50 to 100 thousand population each year.   At those rates, and with a population of under 300,000, French Polynesia might reasonably expect to see 3 to 10 cases a year -  not 41 in four months.

Yesterday the ECDC updated their weekly Communicable Disease Threats Report with the following on the Zika Outbreak in the South Pacific.

It is estimated that more than 29 000 cases have sought medical care with Zika-like symptoms in French Polynesia since the beginning of the outbreak in October 2013. Health authorities in the territory report a concurrent significant increase in neurological syndromes and autoimmune illnesses. There is a simultaneous dengue outbreak in the region. The cause of the complications and their possible links with ZIKAV or dengue virus infections are being investigated. No neurological complications have been reported to date in New Caledonia.


Public health control measures, including increased surveillance and the promotion of measures to avoid mosquito bites, have been implemented in both affected territories.

This is the first documented outbreak of ZIKAV infection in French Polynesia and New Caledonia. ZIKAV infection is considered an emerging infectious disease with the potential to spread to new areas where the Aedes mosquito vector is present. There is a risk for the disease spreading further in the Pacific, and for sporadic imported cases in Europe from endemic areas. Vigilance must be enhanced towards imported cases of ZIKAV infection in the EU Member States and EU overseas countries and territories and outermost regions, in particular where effective vectors are present. Early detection of cases is essential to reduce the risk of autochthonous transmission. Clinicians and travel medicine clinics should be aware of the situation in the Pacific islands and include ZIKAV infection in their differential diagnosis.


There is no available vaccine against ZIKAV infection. Travellers can protect themselves by preventing mosquito bites. ZIKAV infection is a mild illness and has not been known to have neurological complications. The reported complications in French Polynesia are not confirmed to be caused by ZIKAV infections. However, there is a temporal association with the simultaneous outbreaks of ZIKAV and dengue. It is important to determine the cause of this increase and a possible association with the ongoing transmission of DENV-1, DENV-3 and ZIKAV.

This unusual spike in GBS and autoimmune disease in the South Pacific may be due to the Zika Virus, Dengue virus, a combination or coinfection by both, or perhaps . . . something completely unrelated.

But in any event, it is unusual enough to have elicited the attention of public health officials around the world, and so we’ll keep an eye on it as well.

Posted by Michael Coston at 4:03 PM