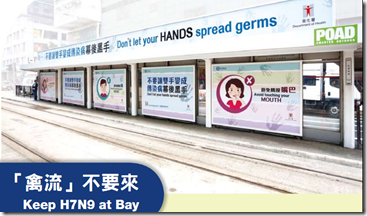 
Despite the recent slow down in reported cases from the mainland, we continue to see the occasional H7N9 case show up in Hong Kong, as is reported today by their Centre For Health Protection.

In this case, it is a 65-year old man who fell in in Shenzhen on March 31st, after purchasing pigeons at a wet market, and who subsequently traveled to Hong Kong on April 3rd.

Thus far, about 80% of known infections have been linked to direct or indirect contact with live birds or wet markets (cite WHO Risk Assessment), and the evidence at this time `. . . . suggests that this virus does not transmit easily from human to human, and does not support sustained human-to-human transmission.’

My thanks to @Ironorehopper of FluTrackers for tweeting the link to this report.

The Centre for Health Protection (CHP) of the Department of Health (DH) is today (April 4) investigating an imported human case of avian influenza A(H7N9) affecting a man aged 65.

The patient, with underlying illnesses, lives in Longgang, Shenzhen alone. He developed fever, cough, blood-stained sputum and diarrhoea on March 31 in Shenzhen. His symptoms persisted and he was found to have fever and sore throat upon arrival in Hong Kong at Lo Wu Control Point on April 3 afternoon. He was directly transferred to the Accident and Emergency Department of North District Hospital (NDH) by ambulance and was admitted for management on the same day.

The clinical diagnosis was pneumonia. His sputum specimen was tested positive for avian influenza A(H7N9) virus upon laboratory testing by the CHP's Public Health Laboratory Services Branch this evening.

The patient is currently isolated in Princess Margaret Hospital under treatment in stable condition.

Initial epidemiological investigation revealed that he had recently bought slaughtered pigeons from a wet market near his residence in Shenzhen.

The CHP's investigations and contact tracing are ongoing. So far, there are no close contacts identified while other contacts including relevant healthcare workers, ambulance staff, and officers at Lo Wu Control Point will be traced for exposure assessment and medical surveillance.

"The Serious Response Level under the Government's Preparedness Plan for Influenza Pandemic remains activated and the CHP's follow-up actions are in full swing," a spokesman for the CHP remarked.

This is the eighth confirmed human case of avian influenza A(H7N9) in Hong Kong. The CHP will notify the World Health Organization (WHO), the National Health and Family Planning Commission as well as health and quarantine authorities of Guangdong and Macau.

Locally, enhanced surveillance of suspected cases in public and private hospitals is underway. The CHP will continue to maintain liaison with the WHO, the Mainland and overseas health authorities to monitor the latest developments. Local surveillance activities will be modified upon the WHO's recommendations.

"In view of human cases of avian influenza A(H7N9) confirmed locally and in the Mainland, further cases are expected in affected and possibly neighbouring areas. Those planning to travel outside Hong Kong should maintain good personal, environmental and food hygiene at all times," the spokesman urged.

"All boundary control points have implemented disease prevention and control measures. Thermal imaging systems are in place for body temperature checks of inbound travellers. Random temperature checks by handheld devices have also been arranged. Suspected cases will be immediately referred to public hospitals for follow-up investigation," the spokesman added.

Regarding health education for travellers, display of posters in departure and arrival halls, in-flight public announcements, environmental health inspection and provision of regular updates to the travel industry via meetings and correspondence are proceeding.

The spokesman advised travellers, especially those returning from avian influenza-affected areas and provinces with fever or respiratory symptoms, to immediately wear masks, seek medical attention and reveal their travel history to doctors. Healthcare professionals should pay special attention to patients who might have had contact with poultry, birds or their droppings in affected areas and provinces.

"We have enhanced publicity and health education to reinforce health advice on the prevention of avian influenza," the spokesman said.