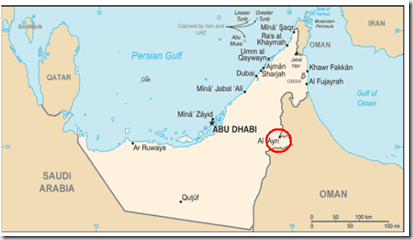 UPDATED 0800 EDT:   Although earlier reports were ambiguous, additional English Language reporting now makes it appear that there are 6 cases, and 1 fatality in this cluster (see Mers virus claims another victim in UAE –khaleejtimes).

The United Arab Emirates Ministry of Interior’s official twitter stream is https://twitter.com/AbuDhabiPolice, which over the past few hours has been tweeting details of an outbreak of MERS-CoV involving 5 healthcare workers in the city of Al Ain (on the Omani border) – one of whom has died.

(Note: Some reports show 1 death, and 5 other cases.  The total number is unclear). – See update above. 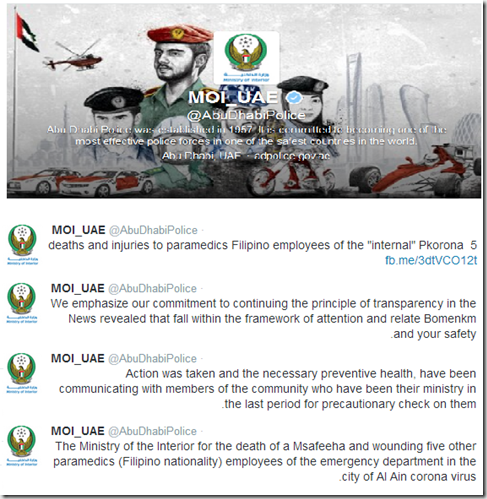 The most recent tweet (approx. 6am EDT) contains a link to the following official announcement on the Abu Dhabi Police website:

Revealed the Ministry of Interior for the death of a Msafeeha, and wounding five others, (Filipinos) of the employees of the emergency department in the city of Al Ain, virus infection Corona, through disclosure and conduct periodic medical examinations on them.ministry said in a statement that it has taken measures health and preventive necessary; placing them in quarantine health, and continued ministry with people who have been first aid from members of the community in the last period for precautionary check on them.ministry confirmed its commitment to the principle of continuous transparency in the News revealed that fall within the community's interest and related to its security and integrity.

Another report appears on the Al Bayan News site:

Interior announces the death of a Corona virus Msafeeha

Interior Ministry announced via computed on e-networking site Twitter about the death of a Msafeeha and wounding five other paramedics (Vlpini nationality) employees of the emergency department in the city of Al Ain corona virus.

The ministry said action was taken and the necessary preventive health, have been communicating with members of the community who have been their ministry in the last period for precautionary check on them.

The ministry confirmed its commitment to the principle of continuous transparency in the News revealed that fall within the framework of citizens' interest and relate to their security and safety.

This latest UAE announcement comes just three days after the announcement of a MERS case in Abu Dhabi (see Meanwhile, In The UAE . . .).

Neighboring Saudi Arabia continues to deal with a significant outbreak in Jeddah (see Saudi MOH Announces 3 More MERS-CoV Cases In Jeddah), along with scattered cases reported in the Riyadh region.


After a quiet start to the new year,  MERS reports across the Arabian Peninsula have definitely begun to increase again.