A Closer Look At The New MERS Numbers 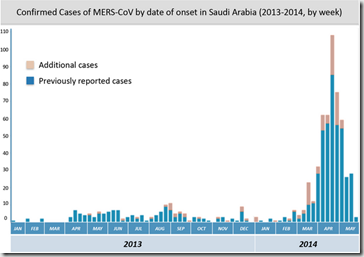 Today’s announcement from the Saudi MOH – adding 113 new cases and 92 deaths – to their previous MERS totals was perhaps less surprising than it was vexing.   I think everyone had pretty much assumed that the `official numbers’ were likely a subset of a larger, unquantified, population of cases.

Anywhere you go, and with any disease you care to mention, cases are always undercounted (see The Fog Of MERS).

So this isn’t a uniquely Saudi problem, although diligence and willingness to report are always factors in the accuracy of case counts.

Frankly, we’ve seen estimates that the `real’ number could be 5 to 10 times higher than the official count (see Transmission Estimates Of MERS-CoV – Lancet Infectious Disease), although the `real’ number is  anyone’s guess.

Still, it’s a common (albeit cynical) reaction often heard  in Flublogia when each day’s tally is announced that,  ` you’d better add another zero to it . . .’.

While today’s new and improved case count may be closer to the truth, we won’t really have a decent handle on how pervasive this virus is in the community until some broad based, and comprehensive, seroprevalence studies are conducted. And that may be months, even years, away.

Although the total number of cases jumped by just under 20%, the number of fatalities announced leapt by nearly 50% (from 190 to 282).

While we don’t know how many of the 53 cases currently under treatment will survive -  if we exclude them - and simply look at those with an already determined outcome (353 recovered, 282 died for a total of 635 cases) , we find that 44.4% of those have died.

Pretty much negating the `happy news’  recently promulgated in the Arabic press that the fatality rate has been steadily dropping.

Admittedly, the real mortality rate is probably considerably lower, but until we get those seroprevalence studies (hint . . .hint) , that’s pretty much intuition, not science.

For those trying to keep track of individual cases and epidemiological trends (see FluTracker’s MERS Case List, and science blogger-analysts like Dr. Ian Mackay and  Maia Majumder) there are now sizable, and vexing gaps in the data.   We literally know nothing about these 113 new cases; not gender, not age, or even location.

Hopefully that information, along with more detailed info on all of the Saudi cases will be made publically available sooner rather than later. It is going to be a nightmare to try to `catch-up’ these lists, assuming it is ever possible.

The Saudi MOH has unveiled what they call their Command And Control Center, where they promise a new openness and efficiency in the fight against the MERS Coronavirus.

With Ramadan, and the influx of hundreds of thousands of visitors to Saudi Arabia less than a month away, one hopes they really mean it.

Posted by Michael Coston at 3:02 PM