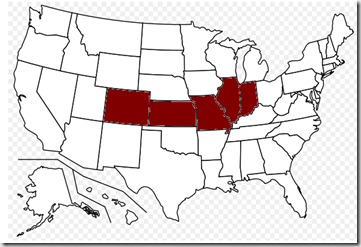 Although lab confirmation is still awaited in some areas, the outbreak of severe respiratory illness in kids that we saw pop up N.W. Missouri a little over a week ago (see Kansas City Outbreak Identified As HEV 68), and then a few days later in St. Louis (see Missouri Health Alert On Enterovirus 68), has now been reported in at least four more states.


This week we’ve seen media reports of hospitals being slammed with (mostly young) patients with respiratory infections in Ohio, Illinois, Kansas, Missouri, and most recently Colorado.  While test results haven’t come back for all of these locations, local doctors are pointing their fingers at the emerging EV 68 virus.

A sampling of some of the media coverage overnight includes:

DENVER — A potentially severe virus that has plagued hundreds of children across a 900-mile stretch in the Midwest in recent weeks has made its way to Colorado.

Children's hospitals in Denver are experiencing an alarming spike in a severe respiratory illness — especially among very young children and those with asthma — that may be caused by an uncommon viral pathogen.

Hospitals across Denver are on alert for a respiratory illness that can leave ...

At Rocky Mountain Hospital for Children, physicians report about 10 of the 20 beds in their pediatric intensive care unit are young people battling the virus. "Our pediatric floor is full of patients with pretty severe respiratory distress," said Dr.Raju Meyappan

DENVER - Denver hospitals and pediatricians offices are seeing a spike in a respiratory virus that is hitting kids hard who have histories of asthma and wheezing. ... "It seems to be what's happening with this virus which is more severe than other viruses.".

Often called EV 68, this virus is primarily known for producing respiratory symptoms - similar to that seen with rhinoviruses - although in some cases it can be severe enough to require hospitalization. There are reports of a number of children ending up in intensive care, some requiring ventilatory assistance, over the past week.

While children are usually the hardest hit, adults are not immune. Co-morbidities – such as asthma – can exacerbate the symptoms.

The virus (genus Enterovirus - family Picornaviridae – species HEV-D) –  is just one of a large family of small RNA viruses that include the three Polioviruses, along with myriad non-polio serotypes of Human Rhinovirus, Coxsackievirus, echovirus, and human, porcine, and simian enteroviruses.

HEV-D68  was first indentified in 1962, but until about 5 years ago, had not been often reported. The CDC called attention to its emergence several years ago - (see MMWR: Clusters Of HEV68 Respiratory Infections 2008-2010) – which looked at a half dozen  HEV 68 associated clusters that occurred in Asia, Europe, and the United States during 2008--2010.

EV 68’s rarity up until now in North America likely equates to very low levels of community immunity, which probably explains its rapid dissemination over the past couple of weeks, spurred on by the start of the school year.

For most kids (and adults) this will likely prove little more than a nasty `cold’ or virus.  But in a small percentage of cases, it can turn severe, and so parents need to pay particular attention this fall.  This virus appears to have `legs’, and so we could see a busy start to the winter respiratory illness season.

While rarely seen in the United States, over the past 10 years we’ve seen this virus on the ascendant in China, The Netherlands, Japan, and the Philippines, sometimes producing significant outbreaks.

A few recent studies include:

Human enterovirus 68 (HEV-68) is an enterovirus associated with respiratory illness. In China, no information about HEV-68 is available for children yet. This study aimed to investigate the presence of HEV-68 in mainland China between 2009 and 2012 and to explore the migration events of HEV-68 across the world.

Among 1565 samples tested from children, 41 (2.6%) were positive for HEV and 223 (14.3%) for human rhinovirus (HRV). Seven (17.1%) of 41 HEVs were HEV-68. Two HEV-68- and five HRV-positive samples were detected in 585 adult samples. HEV-68 is the predominant type of enterovirus in children with acute respiratory tract infection (ARTI), followed by HEV-71 and coxsackievirus A6. Three HEV-68-infected children presented with severe pneumonia and one presented with a severe asthma attack.

The viruses were attributed to two novel distinct sublineages of HEV-68 based on phylogenetic analysis of partial VP1 gene sequences. Migration events analysis showed that the USA and the Netherlands were possible geographical sources of HEV-68, from where three strains migrated to China.

In conclusion, HEV-68 may play a predominant role among the enteroviruses associated with ARTI in children. Additional surveillance is needed to clarify the reason why HEV-68 causes such a wide spectrum of disease, from asymptomatic to severe respiratory disease and even death.

Following an increase in detection of enterovirus 68 (EV68) in community surveillance of respiratory infections in The Netherlands in 2010, epidemiological and virological analyses were performed to investigate the possible public health impact of EV68 infections.

We retrospectively tested specimens collected from acute respiratory infections surveillance and through three children cohort studies conducted in The Netherlands from 1994 through 2010. A total of 71 of 13,310 (0.5%) specimens were positive for EV68, of which 67 (94%) were from symptomatic persons. Twenty-four (34%) of the EV68 positive specimens were collected during 2010. EV68-positive patients with respiratory symptoms showed significantly more dyspnea, cough and bronchitis than EV68-negative patients with respiratory symptoms. Phylogenetic analysis showed an increased VP1 gene diversity in 2010, suggesting that the increased number of EV68 detections in 2010 reflects a real epidemic.

Clinical laboratories should consider enterovirus diagnostics in the differential diagnosis of patients presenting with respiratory symptoms.

Enterovirus 68 (EV68) belongs to species Human enterovirus D. It is unique among enteroviruses because it shares properties with human rhinoviruses. After the first isolation in 1962 from four children with respiratory illness, reports of (clusters of) EV68 infections have been rare. During the autumn of 2010, we noticed an upsurge of EV68 infections in the Northern part of the Netherlands in patients with severe respiratory illness.

To give a detailed description of the clinical and virological data of patients with EV68 infection identified in 2010, and compare these with data collected in 2009.

In 2010, EV68 was identified as the only cause of respiratory illness in 24 patients, of which 5 had to be admitted to the intensive care unit. Sequence analysis revealed different lineages in the majority of EV68 detected in 2010 as compared to the 2009 isolates.

We noticed an increase of EV68 infections and present clinical as well as sequence data, in which two distinct phylogenetic clusters could be identified.

The advice being given this year is pretty standard, but worth repeating: