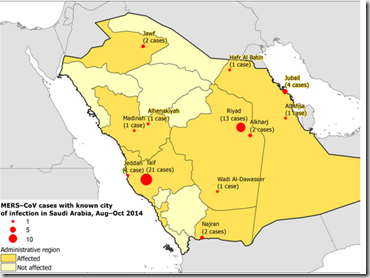 After a brief lull in cases during the summer, case reports of MERS – almost all originating from Saudi Arabia – are back on the rise over the past 60 days, with most of the cases coming from either the Riyadh or Taif region.

Saudi officials have made repeated statements regarding these outbreaks and their response, including Saudi MOH On Recent MERS Cases In Riyadh earlier today.

The ECDC has produced an updated Epidemiological assessment of the ongoing MERS situation emanating from the Arabian peninsula, and as we’ve come to expect from them, it comes with some very impressive charts and graphics.

I’ve only excerpted some of the highlights of the report, so follow the link below to read it in its entirety:

​Since the last ECDC epidemiological update of 22 October and as of 5 November 2014, Saudi Arabia has reported 22 new cases.

As of 05 November 2014, 929 laboratory-confirmed cases of MERS-CoV have been reported to the public health authorities worldwide, including 372 deaths. Most of the cases have occurred in the Middle East – Saudi Arabia, United Arab Emirates, Qatar, Jordan, Oman, Kuwait, Egypt, Yemen, Lebanon and Iran (Table 1). 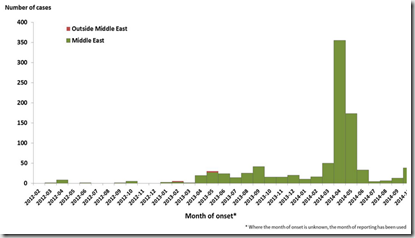 The distribution of cases for the period 1 August to 31 October 2014 suggests an increasing trend in particular in Saudi Arabia (Figure 3). During this time period, Saudi Arabia contributed to 53 out of 56 cases. Qatar, Austria and Turkey reported each one case with a travel history to Saudi Arabia.

Specifically for Saudi Arabia:
• Of the 50 cases where age and sex is known, 41 were males (82%) (Figure 4). The median age for these cases was 60 years (ranging between 17 and 90 years)
• Of the 53 cases, 39 (74%) had unspecified comorbidities reported
• All cases were reported to be symptomatic
• Nine of the cases were classified as healthcare workers
• Six cases reportedly had recent contact with an animal. Of these, three were specified as camels and two people reported to have drank camel milk

The MoH in Saudi Arabia is updating its clinical operations protocol for MERS-CoV for handling patients who are suspected to, or have the disease. They state that 70 percent of recent MERS-CoV cases have been resulting from secondary infections, mainly acquired in the hospital.

• The number of cases notified reflects an increasing trend in reporting cases from July to October 2014.

• As in the past, secondary transmission in hospital continues to play an amplifying role in the transmission of the disease.

• The majority of MERS-CoV cases are still being reported from the Arabian Peninsula, specifically from Saudi Arabia, and all cases have epidemiological links to the outbreak epicentre.

• The latest importation to the EU (Austria) and to Turkey are not unexpected and do not indicate a significant change in the epidemiology of the disease.

• Importation of MERS-CoV cases to the EU remains possible. However, the risk of sustained human-to-human transmission remains very low in Europe.

The conclusions and recommendations of the updated risk assessment of 16 October 2014 remain valid.