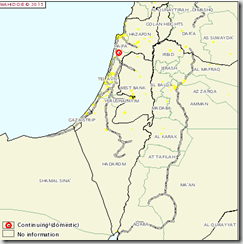 On Saturday, in Media Reporting Unspecified `Bird Flu’ Outbreak at Israeli Farm, we saw early reports of what appeared to be a return of HPAI H5N1 to Israel after an absence of several years.  Today the OIE has published a filing, indicating that preliminary testing found H5N1 at a turkey farm in northern Israel. 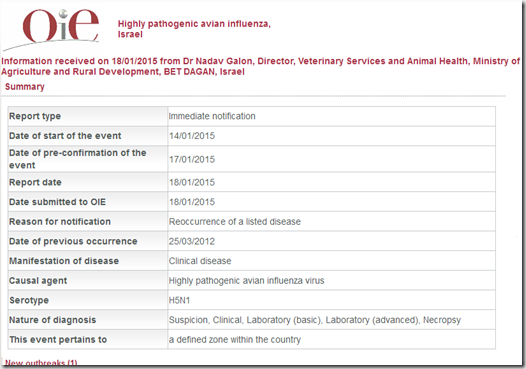 The epidemiological investigation is ongoing. The first time H5N1 occurred in Israel was in March 2006 revealing 9 outbreaks. Since then, all the outbreaks that occurred in commercial flocks were also in March (2011, 2012) except one outbreak that took place in January 2010, in the same region of the present outbreak (distance of 8 kilometers). The disease had been also diagnosed in a kindergarden’s minizoo at the end of December 2007, 3 kilometers from the present outbreak. This area has numerous water ponds with water birds wintering in them. The culling of all the flocks is ongoing. Backyard birds in the village will also be culled.

Posted by Michael Coston at 9:32 AM