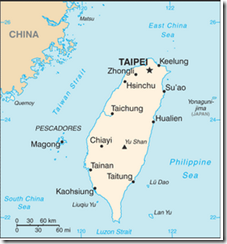 Taiwan’s multi-subtype outbreak of avian influenza across scores of poultry farms becomes even more complex today with the announcement that novel H5N3 has been detected on two goose farms in Kaohsiung and Pingung, in Southern Taiwan.

While I’m sure we’ll get a more detailed analysis in the next few days, this is being reported as a new reassortment between the Korean H5N8 virus and an N3 strain previously reported in Thailand and Mongolia in 2011.


This comes less than a week after the announcement (see OIE Notification On Taiwan’s `New’ HPAI H5N2) of their discovery a new H5N2 reassortant virus, again with the Korean H5N8 virus, and makes the third subtype detected since this outbreak began.

Media reports now put the number of farms with confirmed HPAI at over 100, and that number is likely to grow.   This from the Bangkok Post.

A third highly pathogenic strain of avian influenza that is new to Taiwan was identified Friday as outbreaks of bird flu have spread to more poultry farms on the island, animal health authorities said Friday.

Chang Su-san, director general of the Bureau of Animal and Plant Health Inspection and Quarantine, told a press conference that birds on 101 goose, duck and chicken farms in northern, central and southern parts of the island have been confirmed to be infected with the H5N2, H5N8 or H5N3 subtypes of bird flu virus.

While the Korean H5N8 subtype has not shown any indications yet of infecting humans, it does show an aptitude for spreading long distances quickly via wild and migratory birds, and an ability to readily reassort with other viruses.

Both traits are concerning, as future reassortants may not prove as benign for human health.


But even if this virus remains strictly an avian virus, it poses an immense potential threat to the poultry industry. In a world where 1 in 8 people are under nourished (see Food Insecurity, Economics, And The Control Of H7N9), anything that threatens the production of affordable protein is a major global security concern.

Posted by Michael Coston at 5:56 AM