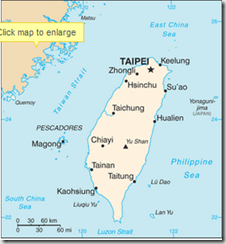 Take this for what it’s worth - since it lacks any real detail - but as soon as I posted this blog entry -  this came over the `wire’ from Focus Taiwan:

Tsai Hsiang-jung said the H5N2 subtype flu strain is a recombinant virus, and "after reporting the case to the World Organization for Animal Health, it will be the first of its kind in the world."

Rumors of H5N8 in Taiwan have been rife the past 24 hours, but this morning we have confirmation that a goose farm in Chiayi County tested positive for this recently emerged avian virus.  Additionally, there are reports of several more farms infected with H5N2 and that genetic analysis reveals this is a new, never seen-before-in-Taiwan strain.

Like everyone else on the trail of this story, my first stop for more information was to be BAPHIQ, Taiwan’s Bureau of Animal and Plant Health Inspection & Quarantine.  Unfortunately their website is not responding, possibly overloaded by hordes of visitors seeking more details.

I’ll try to get an update from there later in the day.

For now, much of what we know comes from the local and international press, and details are a bit sketchy.  But what we know is that on Friday we saw a report from  Taiwan: HPAI H5N2 Outbreak in Pingtung County, and that other farms were being tested.

From Taiwan’s Central News Agency this morning we get the following report describing this `new’ strain, and the detection of H5N8.  How this HPAI H5N2 differs from previous outbreaks (and how it compares to other H5N2 virus outbreaks around the globe) remains to be seen.

Taipei, Jan. 11 (CNA) Taiwan's agriculture authorities confirmed on Sunday that outbreaks of avian influenza at goose farms in southern Taiwan have been caused by two highly pathogenic viruses -- H5N8 and a new type of H5N2 -- seen for the first time in the country.


The Bureau of Animal and Plant Health Inspection and Quarantine under the Council of Agriculture said the bird flu outbreaks reported at four goose farms in Yunlin County have been confirmed as being caused by a new strain of the H5N2 virus.


The H5N8 infection found in tissue samples from geese raised on a farm in Dalin Township in Chiayi County was identified as an H5N8 subtype similar to the avian flu virus that attacked South Korea in 2014, the bureau noted.

The inexorable spread of H5N8 – first detected in South Korea just shy of a year ago (see Korean Poultry Outbreak Due To H5N8) – has led to detections in China, Russia, Germany, the Netherlands, the UK, Japan, the United States and now Taiwan. 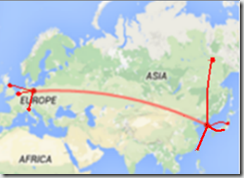 Frankly, we’ve never observed an emergent HPAI virus spread so far, in such a short period of time before.  One can presume that it has arrived in other areas as well, places that do not routinely test for or report on avian viruses.

So far, we’ve no evidence that this reassorted H5N8 virus poses a serious human health threat, but its threat to poultry is all too obvious.  Over the past year South Korea has had to cull 15 million birds, and they are still not rid of the virus.

Like its H5N1 and H7N9 counterparts, H5N8 will undoubtedly evolve into new clades and subclades, and possibly even reassort with other viruses into new subtypes.

So what we can say about its threat, and behavior today may not hold true tomorrow.  The same can be said for H5N2, which up until now has not been considered a serious human health either.

With the H5N8 virus now moving south along the migratory flyways to Taiwan, Southeastern China and Vietnam must now be on heightened alert for its arrival, as well as their neighbors and frankly, all points south.

Posted by Michael Coston at 8:39 AM