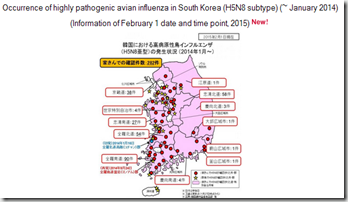 Although it certainly wasn’t clear from the kludgy machine translation of MAFRA’s statement, or the Xinhua News report cited in this blog, this English language report from the Korea Herald  suggests that this latest case may have been detected using rt-PCR (or other viral test method), not through serum antibodies.

Hopefully we’ll get something a bit more authoritative to clarify matters. Until then, Caveat Lector.

Avian influenza was found in a dog on a farm in South Gyeongsang Province amid growing concerns that the disease could spread to other animals, officials said Monday.


The dog ― one of three at a duck farm in Goseong-gun, South Gyeongsang Province ― had antigens for the highly pathogenic H5N8 strain of bird flu, the Ministry of Agriculture, Food and Rural Affairs said. The farm was affected by the disease on Jan. 23.

Different viruses have an affinity for binding to, and infecting, different types of cells.  That is why most viruses are fairly selective as to what organ systems they attack, or even what species they can infect.  This explains why a virus might affect a dog, or a cat, or a bird, yet not affect humans.

This species selectivity is known as its `host range'.

Most viruses generally have a fairly narrow host range (there are exceptions, of course.  Like rabies).  All of which means that avian influenza viruses tend to infect birds, and swine influenza viruses usually infect pigs, and that we pay special attention when ever we see one of these viruses `break the rules’.

The HPAI H5N8 virus, which came to prominence just over a year ago in South Korean poultry and wild birds, has spread remarkably well, now plaguing poultry operations on 3 continents. Although highly destructive in birds, this virus’s one saving grace has been its apparent inability to sicken humans.

I say `apparent inability’ because there has been precious little published on human seroprevalence studies among cullers, poultry workers, and others since the virus emerged last year.

You may recall that during Korea’s H5N1 outbreaks early in the last decade they found 9 cullers (who received prophylactic Tamiflu ®)  that  went on to develope antibodies to the virus, even though none were symptomatic (see Avian Influenza A (H5N1) Virus Antibodies in Poultry Cullers, South Korea, 2003–2004).

We do know that dogs are susceptible to mild or subclinical infection with H5N8, something we saw reported twice last spring (see Korea Detects H5N8 Antibodies In Farm Dog & Korea Finds More Dogs With H5N8 Antibodies), and that is being reported once again today

First the slightly syntax-challenged translation of South Korea’s MAFRA  announcement, followed by a more easily read Xinhua report, after which I’ll return with a bit more.


Factory farms that slaughter for broiler ducks January 23 AI virus has been identified in the previous inspection, and thus farm AI virus was detected in one of my test result breeding dogs are three sampling time were all three had clinical symptoms, the other two antigens, antibodies

No contact is not being propagated as determined by between two dogs that are breeding farm inspection results generated AI * 2014 23 55 two farms in the confirmation H5 antibodies ** 2015 August 24, two tests both farms antibody not detected Agriculture, Forestry, Livestock Quarantine Division was urged to give careful not therefore believe that it is the AI virus has been confirmed in poultry contamination from infected dogs in the dog is not used to our chickens and ducks from the farm to feed.

SOUTH Korea's agriculture ministry on Monday confirmed a dog at a duck farm has been infected with avian influenza.

The bird flu virus was found in a dog among three dogs at a duck farm in southeastern South Korea where the highly pathogenic H5N8 strain of virus was confirmed on Jan. 23, the Ministry of Agriculture, Food and Rural Affairs said at a briefing.

There have been no antigens nor antibodies found in two other dogs, reflecting no dog-to-dog transmission of the virus, the ministry said.

The three dogs, which the ministry estimated may have had infected ducks, were culled.

Since the first case of a dog being infected with the poultry virus in March 2014, there have been 55 dogs found with antibodies to the bird flu virus. The antibody means the immune system of the dogs eliminated the virus.

More than 1.8 million ducks and chicken have been culled since the latest outbreak of the bird flu was reported in September 2014.

H5N8 infection is believed to have been contracted through the consumption of infected birds, something we’ve seen before with both dogs and cats (see A Dog & Cat Flu Review).  New with this report is the announcement that at least 55 dogs in South Korea have now shown evidence of H5N8 antibodies, a four-fold increase over the number revealed last spring.

While it’s still a major leap from sparking antibodies in dogs to posing a human health threat, the ability for an avian flu virus to affect any mammalian species is considered a bit of a red flag.

This isn’t the first time we’ve seen a novel influenza virus jump to dogs from another species.

This ability to be infected by more than one type of influenza virus also opens the door to the possibility that dogs could serve as a `mixing vessel’ for influenza viruses, through a process called Reassortment. 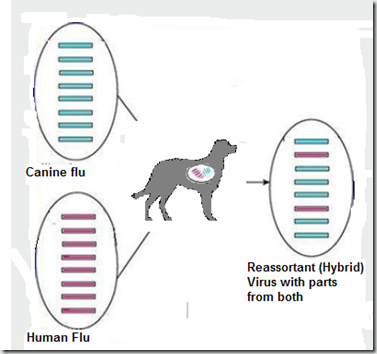 Reassortment, or `Shift’ occurs when a single host is simultaneously infected with two different influenza viruses.   When that happens, it is possible for viruses to swap parts of their genetic sequence, and create a new, hybrid virus.

While most of the time, this leads to an evolutionary failure, every once in awhile this process produces a viable, even highly competitive, new flu strain.

Although pigs and birds are vastly better `mixing vessels’ for influenza than dogs or cats will ever be, companion animals are of particular concern because of how closely humans interact with them.

Of course, if there is some – as yet unidentified - `species barrier’ that prevents H5 viruses from adapting well enough to humans to pose a serious threat, then all of this concern may be moot.

Some scientists believe that may be a possibility (see Are Influenza Pandemic Viruses Members Of An Exclusive Club?), but few are willing to gamble on our being that lucky.

On Friday, because of the recent arrival of HPAI H5 (H5N8, H5N2 & a `new’ H5N1) into North American birds, the CDC prudently issued two pieces of interim guidance (see links below), that have this to say about the risks posed by HPAI H5 viruses:


An acknowledgment that not only do viruses change over time, so can our understanding of their abilities and threats.