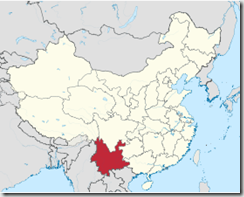 Twice last week (see HERE and HERE) we were informed of recent H5N1 infections in Kunming – the capital and largest city (pop. 3 million) in Yunnan province.

Today we are informed of a 3rd case – this time from Chuxiong – roughly 180 km west of Kunming , involving a 6 year-old boy who has recovered.


This makes the 5th H5N1 case reported by Mainland China in 2015, the largest number reported since 2009, when China reported 7 cases and 4 deaths.


This from Hong Kong’s CHP.

The Centre for Health Protection (CHP) of the Department of Health (DH) today (April 3) received notification from the National Health and Family Planning Commission (NHFPC) of a human case of avian influenza A(H5N1) affecting a boy aged six in Yunnan.

According to the information provided by NHFPC, the patient lives in Chuxiong and has presented with fever on March 23. He attended a local hospital on March 25 and has currently recovered after treatment. His specimen, which was tested by the relevant authority, was positive for avian influenza A(H5N1).

"Locally, we will remain vigilant and work closely with the World Health Organization and relevant health authorities to monitor the latest developments," a spokesman for the DH said.