EID Journal: ARI’s In Travelers Returning From The Middle East 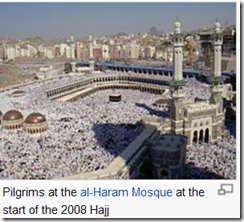 Second in attendance only to the Hajj, more than 1.5 million religious pilgrims from around the world are currently in the Saudi Holy Cities of Mecca and Medina for  the month of Ramadan as they perform Umrah – a smaller version of the Hajj.

Mass gatherings such as the Hajj, Chunyun (Chinese New Years-Spring Festival), Carnival in Rio, Mardi Gras, and the Super Bowl all bring together huge groups of people, and all have the potential to amplify the transmission of diseases.

One need only read the CDC’s long list of recommendations for the Hajj and Umrah in Saudi Arabia (Alert - Level 2, Practice Enhanced Precautions) to understand how seriously public health takes these health threats..

But over the past 3 years we’ve also seen the emergence of a novel coronavirus (MERS-CoV) on the Arabian Peninsula that has infected well over 1,300 people, and has now been exported to more than 2 dozen countries.  Although the risk of infection is low right now - as cases arriving in Korea and Thailand recently illustrate - it is not zero.

Which means that many countries around the world are checking returning travelers returning from the Middle East for signs they might be infected.

The long incubation period (up to 14 days) and often subtle early symptoms of MERS makes interdiction of infected passengers at the airport a bit of a long-shot (see MERS: The Limitations Of Airport Screening). Making the task even tougher are the large  number of non-MERS respiratory infections many travelers return home with.

You may recall a study we looked at in  Clinical Infectious Diseases (co-authored by Ziad Memish) - Unmasking Masks in Makkah: Preventing Influenza at Hajj – from 2012 that found:

Each year more than 2 million people from all over the world attend the Hajj pilgrimage to Saudi Arabia. At least 60% of them develop respiratory symptoms there or during outward or homebound transit [1, 2] During recent interpandemic years, approximately 1 in 10 pilgrims with respiratory symptoms in Makkah have had influenza detected by polymerase chain reaction tests of respiratory samples [3, 4]. Pneumonia is the leading cause of hospitalization at Hajj, accounting for approximately 20% of diagnoses on admission [5].

Last year, in EID Journal: Respiratory Viruses & Bacteria Among Pilgrims During The 2013 Hajj, we looked at another study that examined a small group of French pilgrims (n=129) both before and after attending the Hajj, and compared nasal swabs.  They found:

. . .  that performing the Hajj pilgrimage is associated with an increased occurrence of respiratory symptoms in most pilgrims; 8 of 10 pilgrims showed nasal or throat acquisition of respiratory pathogens.

This heightened level of `viral noise’ level among travelers returning from the Middle East makes it all that much difficult to identify and isolate potentially infected MERS cases.

All of which serves as prelude to a new EID Journal Dispatch that looks at the results of screening for Acute Respiratory Infections among passengers returning to Ontario, Canada from the Middle East over a period of 20 months.

While no MERS cases were detected, public health officials did identify and isolate 177 passengers with Acute Respiratory Infections who met the criteria for additional testing. The authors call for greater emphasis on flu vaccines for travelers, to try to reduce the number of people who must be tested.

We examined which respiratory pathogens were identified during screening for Middle East respiratory syndrome coronavirus in 177 symptomatic travelers returning to Ontario, Canada, from regions affected by the virus. Influenza A and B viruses (23.1%) and rhinovirus (19.8%) were the most common pathogens identified among these travelers.

During November 2012–June 2014, a total of 177 international travelers returning to Ontario were considered persons under investigation (PUIs) for MERS-CoV, according to the guidelines of the Ontario Ministry of Health and Long-Term Care (6). PUIs were recommended to be isolated and screened for MERS-CoV and other respiratory pathogens (6).

Although the risk for MERS-CoV importation is low, respiratory virus infections acquired abroad or locally after returning to Canada might be relatively high and consistent, occurring in 87 (49.2%) of 177 PUIs during the study period. Most influenza B cases were detected shortly after the 2014 Ontario peak (PHOL, unpub. data). Furthermore, 75% of PUIs with influenza B reported symptom onset within 4 days after their return, possibly indicating local acquisition. Similarly, PUIs with enterovirus or rhinovirus detected probably acquired disease in Canada, given the short incubation period (mean 1.9 days) of rhinovirus (14).

Because limited information about clinical severity or outcomes was reported to PHOL, we were unable to report on the clinical spectrum of PUI presentation. Furthermore, pathogens were not identified for all samples, possibly because of delays between symptom onset and specimen collection, sampling technique, or other factors.

The number of PUIs with influenza (41 [23.2%]), whether acquired locally or abroad, is of particular concern. Unnecessary identification of PUIs could be avoided with more comprehensive vaccination coverage. Influenza vaccination should be a priority for all persons and should be recommended by health care practitioners who advise travelers. In addition, surveillance should continue for other respiratory pathogens so that their effects on health systems, when they co-circulate with emerging pathogens with similar clinical presentation, can be better understood.

While this lack of MERS detection among travelers returning to Ontario is encouraging, as long as MERS circulates in the Middle East the threat remains.  Additionally, the importation of other viral and bacterial strains from around the world still carries with it considerable public health implications.

Just two examples:  In 1999 we saw West Nile Virus imported to New York City, likely carried by a viremic traveler, and in 2013 Chikungunya was introduced to the Americas (see WHO: Chikungunya In Caribbean – French Part of St. Martins) presumably in much the same way.

In both cases, these imported viruses have found a suitable new home, and have spread widely causing considerable human illness and economic costs.

As we discussed in The New Normal: The Age Of Emerging Disease Threats, we are probably more vulnerable to global disease threats now than we have ever been before.  Whether it is from something novel and exotic – like avian flu or MERS – or from the relocation of an old scourge - like malaria  or yellow fever – to a new area of the world.

All of which makes yesterday’s call (see TFAH Issue Brief: Preparing The United States For MERS-CoV & Other Emerging Infections) to prepare for the next imported threat all the more critical.

Posted by Michael Coston at 7:45 AM