For the past week there has been a good deal of speculation - mostly in the Korean media - about the possibility that the Korean MERS virus has mutated into a more easily transmitted virus; a `Korean Variant'.

Overnight we've word that viral sequences from the second Korean patient (wife of the index case), and the Korean who traveled to China have been uploaded to GenBank, and early analysis by experts indicates both are very similar to to strains already seen in the Middle East.


Christian Drosten from Bonn University is one of the world's best  known MERS researchers, and commented on the Chinese sequences earlier today on Twitter.

Since then, the Korean sample has been uploaded (see statement below), and Dr. Drosten commented. 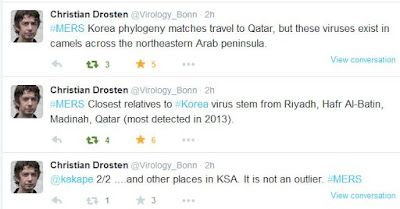 In other words, while there may be some minor changes, nothing jumps out to suggest the Korean virus has mutated in any meaningful way.

While `minor' changes might affect the transmissibility of the virus in some way that we wouldn't necessarily recognize through the sequences, for now there is no reason to suspect that we are dealing with a `mutated' strain.

Here is the statement from the Korean HHS.

* the whole genome base sequence : genetic information of the virus in the order of at least an information unit that has the , base of the genome of the virus Homers about 3 being manyeogae


○ to complete the full sequences cultured Homers virus , the virus Society of Korea , the US Centers for Disease Control and Prevention (CDC · Centers for Disease Control and Prevention, Holland Biomedical Research Center (EMC · Erasmus Medical Center) , including domestic and foreign research institutions and professional virus by sharing association with gene sequence information , analyze the characteristics of the inflow to Korea Homers virus .

○ As a result , Homers virus entering the country such as Saudi Arabia expressed gene sequence that matches with the virus who almost epidemic in the Middle East .

** Homers virus first discovered 2012 years , from Saudi Arabia patient EMC is the first time a virus isolation , the US National Institutes of Health (NIH · National Institues of Health) bank of genetic information (GenBank) to `JX869059 ' a number gotta keep and , this being when compared to standard variants of Homers .