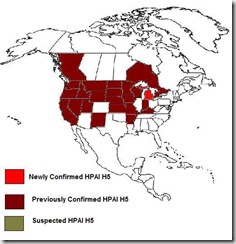 The arrival to North America of Highly Pathogenic Avian influenza via migratory birds had long been anticipated (see 2008’s USGS: Genetic Evidence Of The Movement Of Avian Influenza Viruses From Asia To North America), but until last fall had remained more of an academic exercise than an actual threat.

Since December, however, we’ve seen the devastating effects of HPAI H5N8’s arrival and it’s subsequent reassortment into HPAI H5N2 and HPAI H5N1on North America’s poultry industry.   A toll that includes the loss of more than 48 million birds, hundreds of jobs, and millions of dollars.

APHIS (the Animal Plant Health Inspection Service of the USDA) today announced two updated plans to provide stepped up surveillance this fall and winter for the spread of these (and other) avian flu  viruses.

The second plan – outlined in a 29 page document called  2015 Surveillance Plan for Highly Pathogenic Avian Influenza in Waterfowl in the United States— presents the following objectives for wild bird surveillance for 2015-2016.

Although it has been more than two weeks since the last avian flu outbreak was reported in the United States,  the expectation is that migratory birds will return in the fall carrying these – and possibly other – HPAI viruses.   As these birds intermingle in their high latitude nesting areas, the potential exists for these viruses to reassort into new subtypes, and like all flu viruses over time they can evolve via antigenic drift.

Either way it will be imperative to know where these viruses are spreading, and if they are changing in any meaningful way, as early as possible.

The first updated plan— U.S. Interagency Strategic Plan for Early Detection and Monitoring for Avian Influenzas of Significance in Wild Birds—describes a unified national system for migratory wild bird sampling involving Federal, State, university and non-governmental organizations. The second updated plan— 2015 Surveillance Plan for Highly Pathogenic Avian Influenza in Waterfowl in the United States— outlines specific wild bird surveillance efforts for 2015-2016. These efforts were led by the Interagency Steering Committee for Surveillance for HPAI in Wild Birds.  This committee is comprised of experts from  USDA APHIS, the Department of the Interior’s U.S. Geological Survey and U.S. Fish and Wildlife Service, the U.S. Department of Health and Human Services’ Centers for Disease Control and Prevention (CDC) and the National Flyway Council.

“The early detection of avian influenza remains key to controlling its spread and minimizing its effects,” said Dr. John Clifford, USDA chief veterinary officer.  “Many of the activities outlined in these plans are already being implemented and help warn us of any re-assortments or changes in low or highly pathogenic avian influenza viruses in wild birds which could be detrimental to our domestic flocks.”

Samples will be collected primarily from live-captured and hunter-harvested dabbling ducks, such as American black duck, American green-winged teal, mallard and Northern pintail. Additionally, environmental fecal samples from waterfowl and samples from morbidity and mortality events of all wild bird species also will be collected. Results from the surveillance effort will be incorporated into national risk assessments as well as preparedness and response planning efforts so that HPAI risks are reduced in commercial poultry, backyard poultry, game bird farms, wild birds, wild bird rehabilitation facilities, falconry birds, and captive bird collections in zoos/aviaries.

Posted by Michael Coston at 3:43 PM