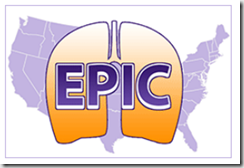 CAP, or Community Acquired Pneumonia, exacts a heavy toll each year on both adults and children, and is the #1 cause of hospitalization of adults with an infectious disease in the United States. Each year it is a major cause of morbidity and mortality, particularly among  the elderly.

Yet despite this impact, there still remain major gaps in our understanding of this ubiquitous disease.

The mantra for many years has been that while CAP can be caused by a variety of (viral, bacterial, and fungal) pathogens, that bacteria were the most commonly identifiable etiology - with S pneumoniae, H influenzae, and M catarrhalis  making up the bulk of bacterial detections.

The rub has been that in at least half of the cases, no cause has been identified, and that until relatively recently testing for bacteria – while far from perfect - has been far more reliable than testing for viruses.

In order to better understand the impact, and etiology of community acquired pneumonia, five years ago the CDC began their EPIC Study (Etiology Of Pneumonia In the Community) – which they describe as a:

. . .  prospective, multicenter, population-based, active surveillance study; systematic enrollment and comprehensive diagnostic methods were used. The main objective of the EPIC study was to determine the burden of pneumonia hospitalizations in U.S. children and adults as well as to identify viruses and bacteria associated with these hospitalizations. Patients were enrolled from January 1, 2010 – June 30, 2012, at three pediatric hospitals in Memphis, Nashville, and Salt Lake City, and five adult hospitals in Chicago and Nashville.

Five years and nearly 2,500 eligible patients later (median age 57), and we have the latest published results (in the NEJM) that finds that while in the majority (62%) of cases no definitive pathogenic agent was identified – among those that were – viral infections out-numbered bacterial infections by roughly 2:1.

The most commonly detected pathogens were:

“Pneumonia is a leading cause of hospitalization and death among adults in the United States and in 2011 the medical costs exceeded $10 billion,” said CDC Director Tom Frieden, M.D., M.P.H. “Most of the time doctors are unable to pinpoint a specific cause of pneumonia. We urgently need more sensitive, rapid tests to identify causes of pneumonia and to promote better treatment.”

The link to the NEJM study follows, after which I’ll return with a bit more:

In January of this year, another EPIC study was published in the NEMJ, this time on pneumonia among hospitalized children.  Unlike the above study, the success rate of isolating viral and bacterial pathogens among the 2222 children (median age 2) with radiological evidence of pneumonia was much higher at 81%.

Human rhinovirus was detected in 22 percent of cases, but it also was identified in 17 percent of asymptomatic controls who were enrolled, by convenience sample, at the same sites during the same period. This makes it challenging to interpret the meaning of human rhinovirus detection in children hospitalized with pneumonia.

Although bacteria were less commonly detected, the authors note that the study results reflect the success of widespread bacterial conjugate vaccination in the United States in substantially reducing previously common bacterial infections like pneumococcal and Haemophilus influenzae type B disease. However, currently available bacterial diagnostics have limited sensitivity, particularly in children. In the absence of a recognized, common standard for bacterial pathogen detection in pneumonia, the EPIC study findings, which are based on current state-of-the-art diagnostics, suggest that the incidence of bacterial pneumonia is lower than previously reported.

A list of available papers and studies based on the EPIC study are available  HERE.

Posted by Michael Coston at 8:06 AM

UK Academy Of Medical Sciences: Looking Ahead To COVID-19 Over Winter 2021/22 & Beyond