Video: Florida DOH On The Link Between Armadillos & Leprosy

The past couple of weeks armadillos and leprosy (Hansen’s Disease) have been in the news again, as Florida recorded its 9th case of 2015 (see Newsweek’s Spitting Armadillos Blamed for Florida’s Emerging Leprosy Problem). Although  rare, the United States still sees about 150-220 cases each year, and 200,000 cases are estimated around the world each year.

Indigenous cases are primarily associated with contact with armadillos – for some, a southern delicacy – and known reservoir for the bacteria: Mycobacterium leprae (see my 2011 blog  Hint: Don’t Order The `Possum On the Half Shell’). 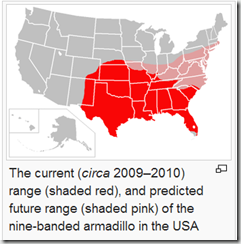 Armadillos are not native to Florida, or the southeastern United States for that matter, but have proliferated and expanded their range remarkably over the past 50 years. They are now so numerous in Florida, and so often end up as road kill, that the old joke `Why did the chicken cross the road?’ now has a Florida-centric punch line:

`To prove to the armadillo it can be done.’

Here in the United States, Hansen’s disease is studied and tracked  by the HHS’s National Hansen's Disease (Leprosy) Program.  Some excerpts from their homepage:

A genetic study at the National Hansen’s Disease Program reports that armadillos may be a source of infection in the southern United States. The Program advises:

With this prolonged incubation period - running from 5 to 20 years - determining how and where someone might have been exposed in our highly mobile society can be difficult, or even impossible.

All of which serves as prelude to a press release and short video, released by the Florida Department of Health yesterday, answering questions about the risks of leprosy from contact with armadillos.

TALLAHASSEE—In an effort to facilitate media interviews regarding Hansen’s disease, formerly known as leprosy, the Florida Department of Health has made available a broadcast-quality, downloadable interview with Deputy State Epidemiologist Dr. Carina Blackmore. The video can be accessed here: http://www.floridahealth.gov/diseases-and-conditions/leprosy/index.html 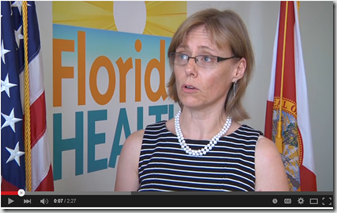 In Florida, between two and 12 cases are reported each year. So far in 2015, nine cases have been reported in Florida residents. The incubation period for Hansen’s disease is two to 10 years, which makes it inherently difficult to identify the exposure source.

The department recommends that people avoid contact with wild animals, such as armadillos and to take precautions if they must handle them by using gloves and washing their hands before and after exposure.

Posted by Michael Coston at 8:13 AM