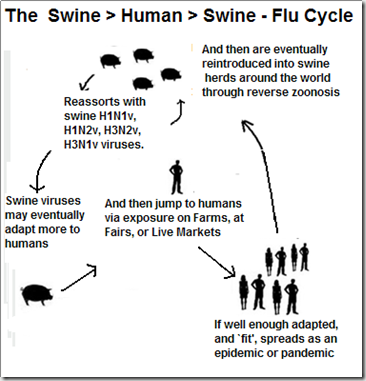 Although bird flu has gotten the bulk of the press coverage over the past few years, swine variant viruses (H1N1v, H1N2v, H3N2v) are also consider a potential source of  pandemic viruses, and in 2009 we saw exactly that when a swine-origin H1N1 virus jumped to humans.

As we’ve discussed before, the subtypes of flu viruses that commonly spread in swine (H1, H2 & h3) are also the subtypes that have caused all of the known human pandemics going back 130 years (see Are Influenza Pandemic Viruses Members Of An Exclusive Club?), and so are regarded as have less far to `jump’ to than many avian viruses.

Although human infections with swine-origin viruses are rare (usually only a handful are reported each year), in 2012 the United States saw more than 300 cases, possibly the result of the acquisition of the M gene from the 2009 H1N1 virus, which is may have enhanced its transmissibility.

Since then, we’ve seen a number of studies looking to see just how susceptible the world’s population would be to an emerging H3N2v virus.

Today the ECDC’s Eurosurveillance Journal publishes a study that similarly finds low levels of cross-protective antibodies against H3N2v in children under 10, while protection appeared highest in adults aged 18 to 29 years.

As with the earlier studies, immunity appears to decline with age.

Unlike the studies listed above, which looked for antibodies against the North American H3N2v virus, today’s research tested against a European H3N2v virus. The study describes the three different H3N2 viruses used in this research thusly:

The entire report is well worth reading in its entirety, but I’ve only excerpted the abstract and final paragraph below.

To estimate susceptibility to the swine-origin influenza A(H3N2) variant virus (A(H3N2)v) in the German population, we investigated cross-reactive antibodies against this virus and factors associated with seroprotective titre using sera from representative health examination surveys of children and adolescents (n = 815, 2003–06) and adults (n = 600, 2008–10).

Antibodies were assessed by haemagglutination inhibition assay (HI); in our study an HI titre ≥ 40 was defined as seroprotective. We investigated associated factors by multivariable logistic regression.

Prior influenza vaccination was associated with higher odds of having seroprotective titre (odds ratio (OR) for children and adolescents: 3.4; 95% CI: 1.8–6.5; OR for adults: 2.4; 95% CI: 1.7–3.4). Young children showed the highest and young adults the lowest susceptibility to the A(H3N2)v virus.

Any influenza vaccination in the lifetime of our study participants (after adjustment for age and sex) was positively associated with having a seroprotective titre of cross-reactive antibodies against all three investigated strains. This effect was strongest for the human influenza A(H3N2) virus A/Perth and weaker for the swine-related influenza A(H3N2) viruses A/Wisconsin and A/Niedersachsen, which is plausible considering that A/Wisconsin and A/Niedersachsen are less related to human vaccine strains than A/Perth.

Our results indicate that young children have the highest susceptibility to infection with the A(H3N2)v virus. In case of increased sustained human-to-human transmission of the virus, these children may contribute to the rapid spread of the A(H3N2)v virus as transmission among children plays a major role in the propagation of the spread of influenza [35]. They are also at high risk for severe disease from influenza infections.

A large proportion of the population 10 years and older has cross-reactive antibodies at potentially seroprotective level and thus, based on this correlate for immunity, may be at low risk for A(H3N2)v infection. Our results suggest that the first exposure to circulating seasonal influenza viruses in a person’s lifetime may predict their long-term cross-reactive antibody response.

These cross-reactive antibodies can be boosted by vaccination and possibly by exposure to seasonally circulating influenza viruses. Further studies may further our understanding of the effect of seasonal influenza viruses on the serological immune response.

Of course, the usual caveats for seroprevalence studies apply.

For some additional background on swine variant influenza viruses, you may wish to revisit: