Adding Accountability To The IHR 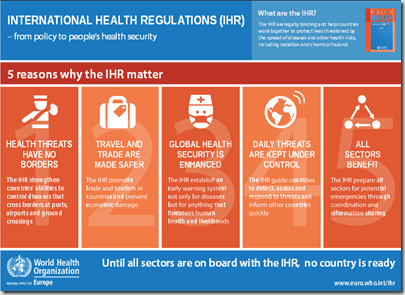 In 2005 – two years after the SARS epidemic, and during the early years of H5N1’s emergence – the World Health Organization produced the first major revision to the IHR (International Health Regulations) in 35 years, which was voted upon and approved to go into effect in 2007.

With expanded global travel and trade, along with a growing number of emerging disease threats, it was glaringly obvious the world needed a more cohesive, and cooperative approach to managing emerging infectious diseases.

The new 2005 IHR required – among other things – that countries develop mandated surveillance and testing systems, and that they report certain disease outbreaks and public health events to WHO in a timely manner.

Although the agreement went into force in 2007, member states had until mid- 2012 to meet core surveillance and response requirements.

Most nations, however,  failed to meet that deadline, and an extension – not to exceed two years – was granted.

Despite a deadline certain, another extension was needed in 2014, after many nations once again failed to implement the core requirements (see WHO: IHR & Global Health Security).  Thus pushing the new deadline for final implementation of the IHR to at least 2016.  A few months ago the WHO tweeted:

Barring a miracle, it seems likely that another extension will be needed again next year. But there have also been problems in communications and cooperation, even from countries who already have the means to fulfill these core requirements.

While supposedly binding for all 193 WHO member nations, the IHR is notoriously lacking in `teeth’.  Nations agree to abide, but there is little recourse if they don’t follow through.

Over the summer, the Report of the Ebola Interim Assessment Panel - which was highly critical of the WHO’s structure and response - also laid a good deal of the blame on a lack of international financial support, and insufficient cooperation, by their member nations.

Although the panel put forth more than 20 specific recommendations, the first 6 dealt with strengthening the IHR.

The Panel recommends as follows.

1. WHO should propose a prioritized and costed plan, based on independently assessed information, to develop core capacities required under the International Health Regulations (2005) for all countries. The financing of this plan is to be done in close partnership with the World Bank.

2. All levels of WHO should be strengthened in order to increase the Organization’s ability to independently identify health risks and to declare health emergencies.

3. The IHR Review Committee for Ebola should consider incentives for encouraging countries to notify public health risks to WHO. These might include innovative financing mechanisms such as insurance triggered to mitigate adverse economic effects.

4. The IHR Review Committee for Ebola should consider disincentives to discourage countries from taking measures that interfere with traffic and trade beyond those recommended by WHO.

5. The IHR Review Committee for Ebola should consider the possibility of an intermediate level that would alert and engage the wider international community at an earlier stage of a health crisis. At present it is possible only to declare a full Public Health Emergency of International Concern (PHEIC).

6. The United Nations Secretary-General’s High-Level Panel on the Global Response to Health Crises  should put global health issues at the centre of the global security agenda. In particular, it should identify procedures to take specific health matters to the United Nations Security Council and consider incentives and disincentives needed to improve global health security.

From Indonesia’s refusal to share H5N1 virus samples to the Saudi’s chronic foot dragging on MERS, we’ve seen many examples where the spirit – and at times the actual letter – of the 2005 IHR has not been embraced or followed by member nations.

Over the past few months we’ve seen the WHO far more vocal regarding the failure of some nations to abide by these global health regulations, but today Reuters is reporting a UN panel is looking at ways of holding nations accountable for failing to follow the 2005 IHR.

States could be sanctioned for public health failings -WHO boss

"This goes back to governments. If they sign up to the international health regulations they need to honour their commitment. Because if they don't do their part they pose a risk to their neighbours and beyond," she told a news conference.

A global health crisis review set up by U.N. Secretary-General Ban Ki-moon is looking at how to make them accountable, according to Chan.

"As part of the Secretary-General's high level panel I'm sure they will come up with some kind of mechanism to address governments that ignore their duty and responsibility and yet pose a threat to others."

Posted by Michael Coston at 3:12 PM