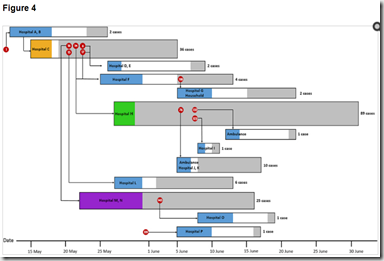 Although it was published last month in the Korean CDC’s official journal Osong Public Health and Research Perspectives, this overview of the their large cluster of MERS cases hasn’t really garnered much attention until today, when it was detailed at length in a Korea Herald article called 83% of Korean MERS cases stemmed from 5 patients.

While the media reports focuses on the role of handful of superspreaders driving this outbreak, the Korean CDC report goes to some length to acknowledge the unique conditions common to the Korean healthcare system that appear to have amplified these chains of infection.  They list:

Moreover, the custom of family members and friends to accompany or visit patients, and to provide care with staying in the same hospital rooms (mostly multibed rooms) or in the crowded emergency rooms, may have also contributed to the increased number of contacts.

The full open access report, which contains a great deal of epidemiological detail on patients and chains of transmission, can be read at the link below.   After which, I’ll return with a bit more on the superspreader phenomenon.

The outbreak of Middle East respiratory syndrome coronavirus (MERS-CoV) infection in the Republic of Korea started from the index case who developed fever after returning from the Middle East. He infected 26 cases in Hospital C, and consecutive nosocomial transmission proceeded throughout the nation. We provide an epidemiologic description of the outbreak, as of July 2015.

Epidemiological research was performed by direct interview of the confirmed patients and reviewing medical records. We also analyzed the incubation period, serial interval, the characteristics of superspreaders, and factors associated with mortality. Full genome sequence was obtained from sputum specimens of the index patient.

A total of 186 confirmed patients with MERS-CoV infection across 16 hospitals were identified in the Republic of Korea. Some 44.1% of the cases were patients exposed in hospitals, 32.8% were caregivers, and 13.4% were healthcare personnel. The most common presenting symptom was fever and chills. The estimated incubation period was 6.83 days and the serial interval was 12.5 days. A total of 83.2% of the transmission events were epidemiologically linked to five superspreaders, all of whom had pneumonia at presentation and contacted hundreds of people. Older age [odds ratio (OR) = 4.86, 95% confidence interval (CI) 1.90–12.45] and underlying respiratory disease (OR = 4.90, 95% CI 1.64–14.65) were significantly associated with mortality. Phylogenetic analysis showed that the MERS-CoV of the index case clustered closest with a recent virus from Riyadh, Saudi Arabia.

A single imported MERS-CoV infection case imposed a huge threat to public health and safety. This highlights the importance of robust preparedness and optimal infection prevention control. The lessons learned from the current outbreak will contribute to more up-to-date guidelines and global health security.

During the SARS outbreak of 2003 – which is generally considered to have been more infectious than MERS - studies found most patients would typically only infect 1 or perhaps 2 additional people, and often none at all.

But a small percentage of patients proved unusually efficient at spreading the disease, with some responsible for 10 or more secondary infections (see MMWR Severe Acute Respiratory Syndrome --- Singapore, 2003).

While impressive totals, it seems unlikely that absent the crowded conditions and lax infection control procedures present in Korean hospitals, these three would have been nearly so successful in spreading the virus.

According to Stein’s excellent 2011 review Super-spreaders in infectious diseases:

Super-spreading events are shaped by host, pathogen, and environmental factors. Often, more than one factor may be implicated in the same outbreak.

The SARS super spreader phenomenon gave rise to the 20/80 rule, that 20% of the cases were responsible for 80% of the transmission of the virus (see 2011 IJID study).  Super spreading events aren’t  limited to SARS, they have been documented with measles, HIV, TB, S. aureus, Ebola, and various STDs . . .among others (cite)

In January of 2013, in Influenza Transmission, PPEs & `Super Emitters’ we looked at research that found a five patients (19 percent) in their study  were "super-emitters" who emitted up to 32 times more flu virus than did the rest. Patients who emitted a higher concentration of influenza virus also reported greater severity of illness.

While the host and the pathogen are important parts to the equation, environment and opportunity also play a pivotal role in exacerbating these super spreader events.

The experience has been, once the threat is recognized and rigid infection control procedures are put into place, these outbreaks can be halted.  The challenge, however, is finding ways to prevent these outbreaks, not just stop them.

Posted by Michael Coston at 9:28 AM