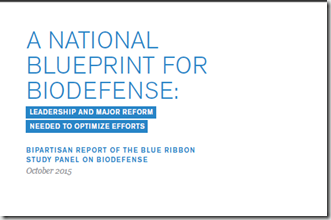 Both have the potential to affect whole nations, if not the entire world, and both are very difficult to adequately plan for.

Last July, in The Lloyd’s Business Blackout Scenario, we looked at the impact of a prolonged grid down disaster caused by solar flares, EMP, or cyber-attack.   All three are plausible, and as we saw in the GridEx 2013 Preparedness Drill, our government is actively looking at ways to mitigate the risks.

I would note that this week long time journalist Ted Koppel has released a book called Lights Out: A Cyberattack, A Nation Unprepared, Surviving the Aftermath, that explores this very plausible scenario.  One that outgoing DHS Secretary Napolitano warned about publicly in 2013.

Today, we have the 84 page Bipartisan Report of The Blue Ribbon Study Panel On Biodefense that looks at our nation’s vulnerability to the the`other’  big threat;  a biological attack, an accidental release, or naturally occurring pandemic with a highly pathogenic biological agent.

Maggie Fox of NBC News has a nice summary, after which I’ll return with links to the report and more.

The Biothreat Is Real — And We're Not Ready, Report Says

It's a scary scenario: A genetically engineered Nipah virus is sprayed into the air during a July 4th celebration in Washington, D.C., and across the country, killing more than 6,000 people.

A badly prepared United States does almost nothing at first, and people die as officials scramble to get a grip on what happened.

While the full 84-page report can be downloaded HERE, which lays out 33 recommendations for the U.S. government to improve their biothreat preparedness.

Nature News also has coverage of this report in:

A focus on weapons such as bombs and nuclear missiles has left the US government ill-prepared to deal with bioterror attacks and even natural threats such as Ebola, according to a group of former government officials.

In a report released on 28 October, the Blue Ribbon Study Panel on Biodefense panel lays out 33 recommendations for the US government to improve its biosecurity policy. Chief among them are the creation of a centralized biosecurity office and a greater emphasis on detecting biological threats through intelligence gathering and surveillance.

While an `intentional release’ of a bio-engineered pathogen might sound the stuff of fiction, the tools and knowledge required to create enhanced or synthetic life forms becomes more affordable and accessible every year.   What once might only have been possible in a multi-million dollar lab can now be done on a limited budget in a basement somewhere.

But even if you discount a deliberate attack, we’ve seen a rash of  lab accidents involving  `select agents’ – like Anthrax, Ebola, H5N1, and even Smallpox – over the past couple of years, many involving government labs. How many others that have gone unreported is unknown.

While none have escaped the confines of the lab, the threat of an accidental release is quite real.

And of course nature’s laboratory is open 24/7 as well, experimenting,  evolving, and constantly coming up with new and challenging biological threats.   We’ve seen an explosion in novel viruses over the past 3 years, and it is likely just a matter of time before one of them is ready for prime time.

All of which makes a consolidated and comprehensive bio-defense policy badly needed and long overdue.