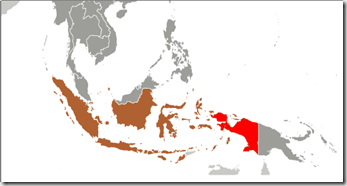 With growing media and public attention and criticisms (see VOA Indonesia Commission: Government Not Serious Death Case Handle 41 Children in Papua) lodged by local observers, the Indonesian Ministry of Health is in the uncomfortable position of having to respond without having any real answers.

On Saturday we saw the initial Indonesian MOH Statement On Papua Outbreak, which basically said they were aware of the reports and were sending in a team of investigators.

Today we get a much longer report that describes the rigors of getting into the rugged back country, the living conditions (lack of sanitation, clean water or footwear, shared quarters with livestock, etc.), and the meager medical resources afforded to this region.

Complicating matters, the inhabitants of this remote region only understand  local Papuan dialects – not Indonesian.  The resulting narrative is murky, at best.  And of course the machine translation doesn’t help.

Samples have been taken, and lab tests will hopefully reveal more.   For now, the Papuan outbreak remains unquantified, and unidentified.  But at least, with this outbreak getting local media attention, we are getting regular reports from the MOH.

The question of the death of a toddler in the Nduga Papua, here's Tim Kemenkes search results

The situation of the terrain at the site of fairly heavy with extreme weather, foggy, rainy with temperatures could reach 6 c. The journey from kampung to kampung is 8 hours by walking up and down the Hill. The people do not speak Indonesia, for that team accompanied the translator team task force bare feet and Papua Province.

Team Kemenkes descended on the Court finds there is a Toddler's death, although no official mortality data recorded both the amount and the time of his death. News of the death of Toddler data circulating in the media came from information Minister felt its citizens have long not been present in the Church. The estimated death toll is a compilation of deaths from June 2015 until now. However, when data from the pastor confirmed with came up to the House of the patient turns out to be the Toddler had died last year.

There is a Clinic in Mbuwa, but has not been functioning properly since the location is quite far from the residence of the population, besides public awareness towards the health facilities are still very low. The number of health workers in Clinics as much as 4 people, consisting of 1 person 1 person midwives, pharmacy, 1 head of clinics and 1 person doctor PTT. The reach of health workers towards the houses is very limited with regard to heavy terrain and a closed society against outsiders. According to doctor PTT served for him there (6 months) delivery by health workers rarely do.

The team also found no relationship has not seen the incident case between one patient with another patient with the idiosyncrasies of the outbreak that is increased incidence of cases above normal suddenly in a community. But there are almost the same symptoms in the form of cough, tightness, fever and some are accompanied by diarrhea.

Residents in district Mbuwa stay at home the several honay accompanied cages of pigs in it. Room in house honay has air circulation is not good. Only small children can stand upright in honay. In general the inhabitants do not use footwear. Terkontaminassi water source with pig manure and water never is cooked when it is consumed.

On Monday (11/29), the Ministry of health sent a team of health will return to conduct the medical examination and immunization and health education. In addition, Kemenkes will bring drugs and MP ASI. Kemenkes will ask for help the TNI in order to penetrate the heavy terrain and difficult access.

The news was broadcast by a public Communication Centre, the Secretariat-General of the Ministry of health of INDONESIA. For more information please contact Halo Kemkes through hotline 1500-586; 081281562620 SMS, facsimile: (021) 52921669, and the contact email address [at] kemkes [dot] go [dot] id.

Posted by Michael Coston at 9:31 AM