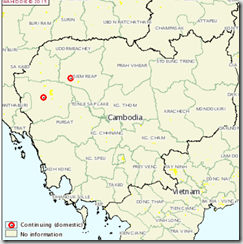 Why, after four years of escalating H5N1 activity, things should suddenly go quiet in Cambodia is unknown.  With The U.S. Naval Medical Research Unit (NAMRU-2) now detached to Phnom Penh, it has been fairly easy to put Cambodia on the back burner, knowing of our surveillance and resource assets there.

And with the emergence of H5N8 in Korea, H5N6 in China and Vietnam, along with new HPAI H5 reassortants in Asia and North America, and an unprecedented H5N1 epidemic in Egypt last spring, we’ve not exactly been deprived of bird flu hot spots to keep track of.

Today, however, the Cambodia government has notified the OIE of two recent outbreaks of HPAI H5N1 in free range ducks kept in the Northwestern part of the country.  This is the first notification in 18 months, and is sufficiently close enough to the Thai border to capture their attention as well. 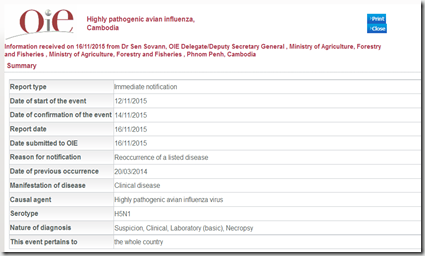 After having been informed by the owners that their duck flocks were sick and were dying, the district and provincial veterinary services went there to investigate and took some samples (sick ducks), which were sent to NaVRI for testing. The result of test samples were confirmed positive with H5N1.

Last winter, H5N1 began turning up again in places like West Africa and Eastern Europe (see Avian Flu On The Move In 2015) for the first time in five years.   While the more recently emerged H5N8/H5N6/H7N9 subtypes are viewed as the `new viruses’ to worry about, H5N1 remains a  threat to both poultry and public health.

While part of a much more crowded viral field than just a few years ago, H5N1 remains a virus to watch.