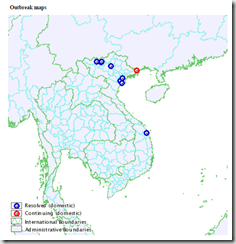 After years of dominating the avian flu world - H5N1 still reigns supreme in the Middle East, India and western Africa - but elsewhere is starting to take back seat to the `next generation’ of avian flu viruses like H7N9, H5N2, H5N8, H10N8 and H5N6.    These new threats began to emerge in 2013, and have quickly established themselves as serious contenders.

Of the three, H7N9 has produced the most human cases by far; 679 cases with 275 deaths. This is widely regarded to be an undercount, as only the `sickest of the sick’ are hospitalized and tested in China.  Unlike the other avian flu viruses of concern, H7N9 is a silent infection in birds, and is only highly pathogenic in humans.

Except for a handful of exported cases (Kong Hong, Canada), however, H7N9 has remained a Mainland China problem.  That could change with time.

H10N8 showed up briefly during the winter of 2013-14, but has not been a factor since.  Nevertheless, it continues on our watch list.

H5N6, while having only caused 4 known human infections (3 fatal), is more widely traveled, having first emerged in Southern China (and concurrently, in Laos) in the spring of 2014, and now is frequently being reported across a wide swath of China, the northern half of Vietnam, and (to a lesser extend) Laos.

We haven’t seen an OIE update from China since August, but at that time they had reported 30 outbreaks since September of 2014. 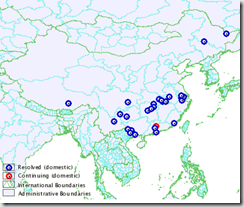 Today Vietnam is reporting another H5N6 outbreak in Ha Tinh province, and is warning of the dangers of further spread of the virus.

As reported by the leadership of Cam Quan, flu H5N6 bird prices are discovered on 2/11, in the cooperative organization of family farming Pham Thi Dung (in village 4). After receiving information that avian expression appetite, sick dying community leaders in collaboration with veterinary services in Ha Tinh province to conduct sample tests at the laboratory in Animal Health Agency Region III (based in the city Vinh City, Nghe An).

Twelve months ago we saw an FAO-EMPRES Report On The Emergence And Threat Of H5N6, with our first detailed look at the virus, along with a short list of other newly emerged HPAI H5 viruses (including H5N8 & H5N3). A rising star, H5N6 was soon relegated to the back of the line when H5N8 (and its reassortant progeny) abruptly turned up in Europe, Taiwan, and North America.

Since its hard to worry about the creek rising when your house is already on fire, our focus right now is on the more immediate threats of H5N1 in Egypt, H7N9 in China, and the return of HPAI H5 to North America and Europe this winter.

But as H5N6 becomes more established in China, Vietnam, Laos – it becomes a more tangible threat.  And one that, like H5N8, could show up someday far from home.

Posted by Michael Coston at 8:15 AM