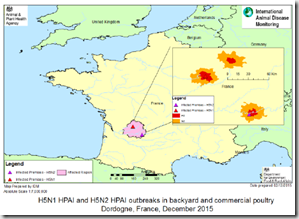 We’ve an updated outbreak assessment from DEFRA (dated Monday, but published today) on the recent outbreaks of HPAI in France - that while informative - unfortunately doesn’t answer the biggest question (posed here, here, and here) regarding the lineage of the HPAI H5N2 virus reported a week ago.

Some excerpts, after which I’ll have a postscript:

France has reported two additional outbreaks of highly pathogenic avian influenza in poultry both in the Dordogne (European Commission, 2015; see map). In the first, a mixed goose and duck fattening commercial premises, an increase in mortality was reported in three young geese and samples tested positive. However the strain was identified as H5N2 HPAI rather than H5N1.

In a further premises, 36km from the IP reported last week, (commercial ducks; 12,000 fattening and 2,000 breeding), samples were taken as part of the EU poultry surveillance programme, and tested positive for H5 serology, but the N subtype has not been determined yet.

Disease control measures have been implemented at both premises, including 3km protection and 10km surveillance zones in line with Directive 2005/94/EC.

The finding of a seropositive case of H5 in a commercial duck farm is important for two reasons: Firstly, as expected, there are few or only mild clinical signs in Anseriform poultry and; secondly, the EU poultry survey works. Information about whether this farm is connected to the backyard case will be of interest. On the finding of H5N2 HPAI in a goose / duck farm on the basis of clinical signs in goslings, this again is not entirely unsurprising as these are young birds. Late last year and early 2015, when outbreaks of H5N8 HPAI were reported in ducks, clinical signs were observed in young ducklings (M.Kramer, Pers.Comm.).

H5N2 viruses are circulating in the EU: several cases have been reported recently of H5N2 LPAI in Italy, including one this week in a commercial turkey farm in Forli province.

The other two were in ornamental birds in Ravenna and Ferrara provinces (all are in Emilia Romagna region) (European Commission, 2015b). In addition, a further outbreak of LPAI H5 (N subtype not confirmed yet) in commercial chickens and ducks in Lombardy region. These European origin LPAI viruses are reported in poultry (as part of the EU poultry survey) yet mutation into HPAI viruses is a rare event. Until the epidemiology of the current outbreaks in France is known, the index cases, level of spread and the wider impact or risk to other regions and Member States is not known at present.

As before, there are still many unknowns, and the risk to the UK as a result of these outbreaks may depend on what the sequencing reveals about the origin of the H5N2 HPAI virus.

At the moment, it is not known whether mutations from LPAI to HPAI (either H5N1 or H5N2) have occurred in the poultry farms themselves or were introduced by some other transmission pathway from another source and if the third case in France is related to either of the other two outbreaks – sequence information will provide more information.

There are now at least three more outbreaks reported in France (with a 4th pending in Haute-Vienne) in the past couple of days, and yet for reasons that are not clear, we are getting remarkably little detail on the subtypes, strains, or lineage of these viruses.

The key question is whether France’s new HPAI H5N2 is related the Eurasian H5N8 virus which visited western Europe last fall, is a reassortant of HPAI H5N1, or is another LPAI to HPAI mutation.

Although LPAI to HPAI conversion has been documented previously, until this year it has been a pretty rare event, with only three events recorded in Europe over the past 10 years (all H7).   You have to go back to 1991 to find a European LPAI H5 to HPAI H5 conversion (cite).

In July of this year we saw two such conversions (H7 in Lancashire and  Emsland), followed by an LPAI H5N1 to HPAI mutation in Dordogne, France last month.

France’s HPAI H5N2 may turn out to be the 4th such conversion in just over 4 months. But, as the DEFRA report points out, we won’t know what we’re dealing with until the sequencing information is released.