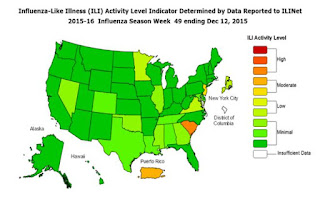 The 2015 fall flu season has been pretty unremarkable, with very little activity reported around the country and (as of last week)- 77% of the Influenza samples tested have been H3N2.

Today's FluView  from the CDC offers a bit of a turnaround, in that the bulk of the (admittedly small) number of influenza A samples tested proved to be H1N1.


Whether this is a blip in the data, or the start of a trend is too soon to tell.

Otherwise, influenza activity remains low - but is slowly increasing - across the country.  Flu activity often doesn't peak until February, so it isn't too late to avail yourself of a flu shot.

The other bit of interesting flu news come with the annoucement of the 6th novel flu virus detection of 2015, this time a swine variant (H1N1v) in Minnesota.


While rarely reported – partly due to limited surveillance and testing – swine variant influenza infections are probably more common than we know.  Illness due to these strains is usually mild to moderate, and the symptoms look like any other flu.

Up until about six years ago the CDC only received 1 or 2 swine variant infection reports each year.  In 2010, that number jumped to 8, and in 2011 to 12.  In 2012 we saw more than 300 cases – mostly mild - and nearly all associated with exposure to pigs at state and local agricultural fairs.

One human infection with a novel influenza A virus was reported by the state of Minnesota. The person was infected with an influenza A (H1N1) variant (H1N1v) virus. The patient was not hospitalized and has fully recovered from their illness. The patient lived and worked in an area near where swine were housed but no direct contact with swine was reported in the week prior to illness onset. No ongoing human-to-human transmission has been identified.

Early identification and investigation of human infections with novel influenza A viruses are critical so that the risk of infection can be more fully appreciated and appropriate public health measures can be taken. Additional information on influenza in swine, variant influenza infection in humans, and strategies to interact safely with swine can be found at http://www.cdc.gov/flu/swineflu/index.htm.


While avian influenza gets the bulk of our attention because of its high mortality rate, swine influenza viruses – while usually less virulent -  are also worrisome because they likely have less of a `leap’ to make in order to adapt to human physiology.


For more swine's potential as `flu factories’, you may wish to revisit: