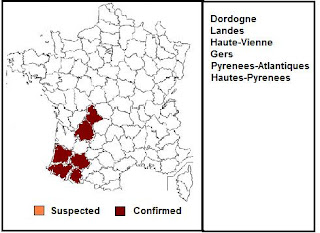 
The French Ministry of Agriculture has updated their avian influenza page with word of one additional outbreak - this time in Gers - of HPAI H5.   The exact subtype is being investigated.


- On December 22, a highly pathogenic influenza outbreak was confirmed in Montaut in a booster workshop 415 geese. The viral strain is being determined.

In total, to date, 62 of highly pathogenic avian influenza outbreaks in poultry were detected in 6 southwestern departments of France.

ANSES gave its opinion delivered on 14 December 2015, on the potential danger to humans from the avian influenza strain identified, including the results of the complete sequencing of the H5N1 strain detected in the first home in the Dordogne. She confirmed the absence for this dangerous H5N1 strain of the key markers for human.


Not included in these numbers are LPAI outbreaks (H5N2 & H5N3) which we last saw updated more than a week ago.


Somewhat remarkably, over the past 4 weeks France has reported at least 5 different types of avian influenza (HPAI H5N1, H5N2 and H5N9  along with LPAI H5N2 and H5N3).


All five have been listed by the OIE as new strains, although we've yet to seen an detailed characterization of these viruses beyond their being of `European Lineage'.


In DEFRA: Updated Outbreak Assessment On HPAI H5 In France, released last Friday, the authors cited this lack of information when they wrote:


These are apparently all European origin LPAI and HPAI viruses, but publicly available detailed genetic data are not available yet. Until the epidemiology and genetic sequencing of the viruses associated with the current outbreaks in France is known, the index case(s) identified, the extent of virus evolution/diversity , level of spread,the wider impact or risk to other regions and Member States cannot be defined at present.


Given the extraordinary circumstances of seeing 5 new avian flu strains emerge in a single location over such a short period of time, the answers to these and other questions are eagerly awaited.