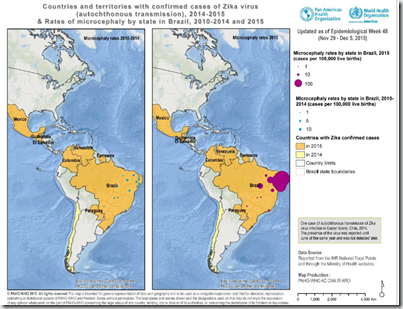 While the full impact of Brazil’s Microcephaly epidemic is far from known, already more than 1000 excess cases of this rare congenital defect have surfaced in the past few weeks, and there are great concerns that this may just represent the leading edge of a much greater tragedy.

Microcephaly is a rare neurological condition where the child’s head is smaller in circumference than normal, and is often associated with severe developmental disorders. It can be caused by congenital disorders, maternal illness or infections, or environmental exposures.

Brazil’s unprecedented outbreak has been tentatively (but not conclusively) linked to the recent arrival of the Zika Virus in that region last spring  (see ECDC: Complications Potentially Linked To The Zika Virus Outbreaks In Brazil & French Polynesia). Additionally, both Brazil and French Polynesia have reported in increase in Guillain–Barré syndrome (GBS) associated with Zika infection.

With nine South and Central American countries now reporting the virus, and the islands of the Caribbean at elevated risk, yesterday WHO/PAHO issued an Epidemiological Alert On Neurological Syndrome, Congenital Defects & Zika Virus.

The irony here is that for the majority of people Zika produces a mild, often asymptomatic infection.  Many pregnant women may be carrying an exposed fetus without ever realizing they were infected. Given the potential for harm, it is hard to argue with Brazil’s Minister of Health’s assessment this morning.

The Minister of Health, Marcelo Castro, said on Tuesday (1) the increase in cases of microcephaly in Brazil is the "greatest calamity" that the country has experienced in recent times. "It is a drama of extraordinary dimensions what is happening. The government and society have to give an answer to the height, "said the minister.

The health minister said the increase in cases of microcephaly in Brazil is the "greatest calamity" that the country has experienced in recent times. Jose Cruz / Agência Brasil

Brazil has 1,248 suspected cases of microcephaly

The statement was made to reporters after opening the 15th National Health Conference, which meets until Friday (4) representatives of all states to formulate the guidelines of the National Health Plan.

While it is greatly overshadowed by the immense human tragedy of thousands of birth defects, it is also worth noting that Brazil is suffering from a deep prolonged recession (see WSJ Brazil GDP Slips for Third-Consecutive Quarter), and an epidemic is never good for one of their biggest industries – tourism.

Should this outbreak expand, it could also seriously tax the limited resources available for public health, social services, and mosquito control.  All vital sectors in order to deal with this outbreak.

Meanwhile, neighboring countries (and much of the Americas) are watching the events unfold in Brazil nervously, wondering when or if they will be thrust into the same kind of crisis.