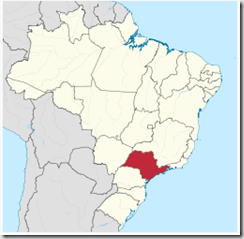 In an indication of just how concerned authorities in Brazil are over the recent arrival of the Zika virus followed by a huge jump in microcephalic birth defects (see WHO/PAHO Epidemiological Alert On Neurological Syndrome, Congenital Defects & Zika Virus), public health officials in São Paulo – well south of where the virus is currently having its biggest impact – are proposing the testing of all pregnant women for antibodies to Zika.

As Brazil’s most populous state ( pop. 44 million), and with more than 600,000 births a year, São Paulo fears it is at considerable risk of seeing a major public health impact from the epidemic.

First some excerpts from a media report appearing in Estado de Minas, after which I’ll have more.

São Paulo, 03 - Concerned about the possible spread of zika virus in São Paulo territory and with the risk of microcephaly outbreak in the state, as recorded in the Northeast, the State Department of Health Department prepares a coping plan to the problem will include diagnostic tests for all pregnant state, intervention state agencies in combating the mosquito Aedes aegypti, made ​​on Thursday, 3 by municipalities, and ongoing monitoring of babies who develop malformation.

The country already has 1,248 cases of microcephaly. The plan will be presented by the State Secretary of Health, David Uip for approval of Governor Geraldo Alckmin (PSDB) tomorrow. "We have to deal with this issue differently from what we were dealing with. Now we are facing three diseases and it is very unlikely that (zika) does not come to São Paulo. The state has to be prepared for what will surely happen" said the secretary.

For still depend on the approval of Alckmin, IPU declined to detail the measures or the amount of resources necessary for coping plan, but said the two main areas of focus will be new strategies to combat the Aedes and monitoring and monitoring of pregnant women. "In general, we work from Vector extermination attempt to specific policies for vulnerable populations such as pregnant." The secretary said the Adolfo Lutz Institute is developing, based on samples provided by the Ministry of Health, a test you can check, even in people who did not have symptoms, if there was infection zika.

Currently, the only available diagnostic test for the disease is pointing to the presence of the virus while the person is still sick. The new test, which uses the method ELISA could detect the presence of antibodies against the virus, an indication that the infection has already occurred. "I want this test to be incorporated into prenatal all pregnant women of Sao Paulo. And in cases where the test is positive, it will be triggered Women's Health personnel to the pregnant woman has provided access to morphological examinations to the emotional support after the child's birth if she has some malformation, "said IPU.

With the 10 fold jump in microcephalic birth defects having occurred over only the past few weeks there are genuine concerns this could escalate into a much greater human tragedy over the weeks and months to come.

Since Zika can present with only mild (or subclinical) symptoms, many women could be unaware of their exposure.  The assumption is the most dangerous time for maternal infection is during the 1st trimester, but at this point no one knows for sure.

ELISA testing – which picks up antibodies to Zika – could tell women whether they’d been exposed to the Zika virus.  But it won’t tell them when.  For now, with Zika newly arrived, it would likely indicate a recent infection.

A year or two from now, a positive ELISA test may be less relevant.

Posted by Michael Coston at 8:06 AM