It is practically an axiom of infectious disease blogging that the first details you get on any emerging disease outbreak are nearly always wrong, or at least misleading. Rarely are all of the pieces to the puzzle immediately available, and the media's narrative is often geared more to boosting circulation than presenting the facts.

As a result, I only sparingly use media accounts in this blog and try to use official releases of information where I can.   Of course, those are often wrong (or biased), as well.


I've called it the `fog of flu'  before - borne of situations where there are alarming but ambiguous reports of something `bad' breaking out - but very little real information.  We deal with it every winter, as we try to parse out the avian H5N1, H5N6 and H7N9 cases from the yearly cascade of seasonal flu and other respiratory outbreaks in places like Egypt and China.


Since November we've been aware of reports of elevated cases of microcephaly in Brazil which the local authorities have tentatively linked to the arrival of Zika last spring. The case numbers have been alarming, the stories of its impact tragic, and we've seen strong warnings issued by our own CDC regarding travel to the region by pregnant women.

But despite all of that, it is far from clear what is going on with Brazil's rates of microcephaly, or even if Zika is responsible.


Overnight both Crof and Dr. Ian Mackay have weighed in on this topic, and I encourage you to read both of their efforts.

First Crof, whose excellent analysis of the (admittedly sketchy) numbers to date (see Is microcephaly surging in Brazil, or just  efforts to find it?), was inspired by Declan Butler's Nature News & Comment article Report questions size of surge in Brazil's microcephaly cases.


Ian took a hard look at this week's  MMWR report Possible Association Between Zika Virus Infection and Microcephaly — Brazil, 2015, and finds it wanting in:

Microcephaly in Brazil: is it occurring in greater numbers than normal or not?


A paper came out yesterday (AEST) from Morbidity and Mortality Weekly Report (MMWR) with the heading...

Reads as though some great data may finally show us a hint of an association between Zika virus (ZIKV) infection and microcephaly disease. Right?

Nope. There are none. At least none that could approach satisfying that title which highlights that it is not just the popular media who can generate misleading titles (headlines in their case).

This lack of evidence doesn't mean the evidence won't be found, or that a problem doesn't exist.  Only that there are an awful lot of questions yet to be answered.

CIDRAP Director Dr. Michael Osterholm, on the other hand, already finds the evidence compelling. He looks at the rise in mosquito-borne threats in the Americas - due in large part to the cutbacks in mosquito control efforts over the past couple of decades - in:

How Scared Should You Be About Zika?


Zika, or perhaps co-infection (or sequential infection) with Zika and other similar arboviruses (DENV, CHKV), may very well turn out to be responsible for increased rates of microcephaly, spikes in Guillain-Barré syndrome (GBS), or other serious outcomes.

Other viral infections have produced similar impacts, so it is certainly plausible.  But until we know for sure, it is important not ignore other possibilities.


While it may be overstated, I find it hard to believe Brazil's reported surge in microcephaly is due entirely to observational bias, even granting that the base line numbers are suspect and most of the cases are still only suspected.  Something certainly seems amiss.

But that's what epidemiological investigations are for . . . to find out.


There are other issues, other unknowns, including determining exactly what species of mosquitoes can (and cannot) transmit the virus, that will need to be nailed down by scientists before we can accurately gauge the impact Zika will have on North America.

I certainly have no inside information or special insight into all of this - but considering the potential impacts to individuals, to families, and to society - it seems only prudent to regard Zika as the most likely culprit - at least until proven otherwise.


Which means, until we know different, the smart money will be on preparing to deal with an enhanced mosquito threat this summer, and likely for many years to come.


Because if it isn't Zika, there's always WNV, Dengue, CHKV, and EEE out there, and they can all ruin your entire day.
Posted by Michael Coston at 2:10 PM

Not To Soon To Be Thinking About Preparedness 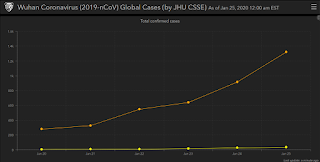