WHO Update - Lassa Fever In Nigeria 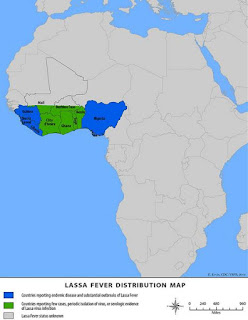 For most of January we've been following a Lassa Fever outbreak in Nigeria (see Nigeria: Lassa Fever Outbreak With 40 Fatalities), one which appears to have an unusually high mortality rate (at least based on the numbers provided).


Lassa is a Viral Hemorrhagic Fever (VHF), albeit not as deadly as Marburg or Ebola. The Lassa virus is commonly carried by multimammate rats, a local rodent that often likes to enter human dwellings. Exposure is typically through the urine or dried feces of infected rodents, and roughly 80% who are infected only experience mild symptoms.

The overall mortality rate is believed to be in the 1%-2% range, although it runs much higher (15%-20%) among those sick enough to be hospitalized.


Like many other hemorrhagic fevers, person-to-person transmission may occur with exposure to the blood, tissue, secretions, or excretions of an individual, although the CDC reassures:

Casual contact (including skin-to-skin contact without exchange of body fluids) does not spread Lassa virus. Person-to-person transmission is common in health care settings (called nosocomial transmission) where proper personal protective equipment (PPE) is not available or not used. Lassa virus may be spread in contaminated medical equipment, such as reused needles.


Today's update from WHO lists 159 suspected cases of Lassa fever and 82 deaths, pushing the fatality rate to over 50%.  The Nigerian MOH's most recent status update  Daily Situation Report No. 16: 24th January 2016 lists:


By either measure, this is an unusually high fatality rate for Lassa Fever.


The last major outbreak of Lassa in Nigeria was  reported in 2012.  Last year, Nigeria only reported 250 cases (likely a substantial under count) and 8 deaths.   By contrast - in 2012 - 117 deaths were recorded, but the fatality rate remained under 10%.

The National IHR Focal Point of Nigeria has notified WHO of different outbreaks of Lassa fever occurring in the country.


Details of the outbreaks

Between August 2015 and 23 January 2016, 159 suspected cases of Lassa fever, including 82 deaths, were reported across 19 states. Investigations are ongoing and a retrospective review of cases is currently being performed; therefore, these figures are subject to change.


The 4 most affected states are Bauchi, Edo, Oyo and Taraba, which account for 54% of the confirmed cases (n=54) and 52% of the reported deaths (n=34). The remaining 15 States have reported less than 5 confirmed cases.


As of 21 January, 2,504 contacts had been listed and 1,942 are currently being monitored. A total of 562 contacts have completed follow up. So far, none of the contacts have tested positive for Lassa fever.

The WHO country office is supporting the Federal Ministry of Health (MoH) in coordinating the response, especially regarding surveillance (including active surveillance and contract tracing), case management, infection prevention and control, and sensitization of community and health workers. WHO and MoH have identified a need to reinforce trainings for clinicians and community sensitization.

Lassa fever is endemic in Nigeria and causes outbreaks almost every year in different parts of the country, with yearly peaks observed between December and February. The disease is an acute viral haemorrhagic illness caused by Lassa virus, a member of the arenavirus family of viruses. It is transmitted to humans from contacts with food or household items contaminated with rodent excreta. The disease is endemic in the rodent population in parts of West Africa. Person-to-person infections and laboratory transmission can also occur, particularly in the hospital environment in the absence of adequate infection control measures. Diagnosis and prompt treatment are essential.

Posted by Michael Coston at 3:04 PM