HK CHP Notified Of Another H5N6 Case In Guangdong Province 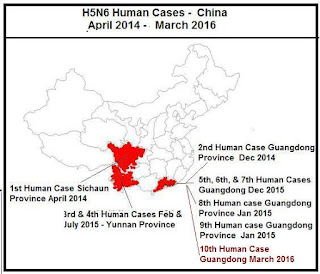 
Although there have been only 9 human H5N6 infections previously reported (plus one in the literature) in the two years since if first emerged, half of those appeared between December 20th, 2015 and January 18th of this year and all were from the same Chinese province (see CHP: Guangdong Province - 5th H5N6 Case In Past Month).


This from Hong Kong's Centre For Health Protection.

The Centre for Health Protection (CHP) of the Department of Health (DH) was notified of an additional human case of avian influenza A(H5N6) in Guangdong by the National Health and Family Planning Commission today (March 15), and again urged the public to maintain strict personal, food and environmental hygiene both locally and during travel.

The case involves a woman aged 40 in Huizhou, Guangdong. She developed fever and cough on February 20 and was admitted to a hospital in Huizhou on February 22. She is now in critical condition. Investigation revealed that the patient had visited live poultry market before onset of symptoms.

From 2014 to date, a total of 10 human cases of avian influenza A(H5N6) have been reported by the Mainland health authorities.

"All novel influenza A infections, including H5N6, are statutory notifiable infectious diseases in Hong Kong," a spokesman for the CHP said.

"We will remain vigilant and work closely with the World Health Organization and relevant health authorities to monitor the latest developments," the spokesman said.


The H5N6 virus is a reassortant of H5N1 and H6N6 that first emerged in the spring of 2014, and since then has generated a good deal of concern as it has been reported in poultry flocks in China, Laos, and Vietnam.


Last October, in H5N6: The Other HPAI H5 Threat, we looked at the history of this rising avian flu threat, while last summer H5N6 Rising: Infecting Birds, Humans, & Even Cats, we looked at a report which appeared last June’s Nature’s Scientific Reports, that warned:

The extensive migration routes of wild birds may contribute to the geographic spread of H5N6 AIVs and pose a risk to humans and susceptible domesticated animals, and the H5N6 AIVs may spread from southern China to northern China by wild birds. Additional surveillance is required to better understand the threat of zoonotic transmission of AIVs.


It has already turned up in wild and migratory birds in Hong Kong (see Hong Kong: Magpie Robin Tests Positive For HPAI H5) several times. Given the lack of wild bird surveillance and reporting out of Mainland China, we don't really have a good feel for how rapidly the virus might be spreading.

While H7N9 and H5N1 have been the most worrisome avian flu viruses to date, H5N6 is showing signs that it is getting its act together, and is definitely a virus to watch.
Posted by Michael Coston at 11:39 AM 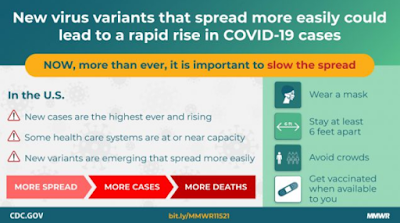