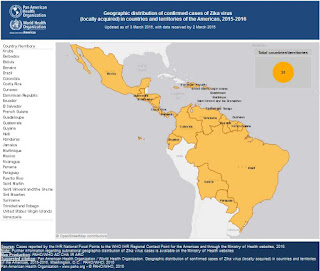 UPDATED:   The Audio File for Today's WHO Press Conference is now available online.


A little after 1pm EST the WHO began a press conference, which is still in progress.  I'll update this blog with a link to the audio file when that becomes available.


The second meeting of the Emergency Committee (EC) convened by the Director-General under the International Health Regulations (2005) (IHR 2005) regarding clusters of microcephaly cases and other neurological disorders in some areas affected by Zika virus was held by teleconference on 8 March 2016, from 13:00 to 16:45 Central European Time.

The WHO Secretariat briefed the Committee on action in implementing the Temporary Recommendations issued by the Director-General on 1 February 2016, and on clusters of microcephaly and Guillain-Barré Syndrome (GBS) that have had a temporal association with Zika virus transmission.  The Committee was provided with additional data from observational, comparative and experimental studies on the possible causal association between Zika virus infection, microcephaly and GBS.

The following States Parties provided information on microcephaly, GBS and other neurological disorders occurring in the presence of Zika virus transmission: Brazil, Cabo Verde, Colombia, France, and the United States of America.

The Committee noted the new information from States Parties and academic institutions in terms of case reports, case series, 1 case control study (GBS) and 1 cohort study (microcephaly) on congenital abnormalities and neurologic disease in the presence of Zika virus infection.  It reinforced the need for further work to generate additional evidence on this association and to understand any inconsistencies in data from countries.  The Committee advised that the clusters of microcephaly cases and other neurological disorders continue to constitute a Public Health Emergency of International Concern (PHEIC), and that there is increasing evidence that there is a causal relationship with Zika virus.

The Committee provided the following advice to the Director-General for her consideration to address the PHEIC, in accordance with IHR (2005).

Posted by Michael Coston at 1:22 PM