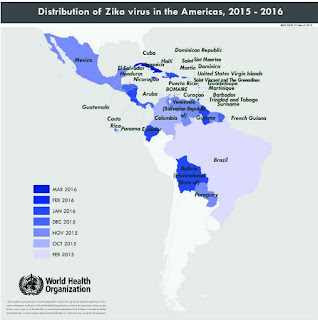 Based on observational, cohort and case-control studies there is strong scientific consensus that Zika virus is a cause of GBS, microcephaly and other neurological disorders.- WHO SitRep


Despite there still being significant gaps in our understanding of the Zika virus, and its impact on human health, today's 13-page WHO Zika SitRep contains the boldest language on causality of Microcephaly and GBS we've seen, citing `strong scientific consensus'.

Last week's report only referred to `mounting evidence' that Zika was `highly likely' to be a cause of microcephaly, GBS and other neurological disorders.


Apparently, based on the growing preponderance of evidence (which has been considerable), the level of confidence has increased. It will be interesting to see if we hear the same kind of scientific consensus expressed at tomorrow's Zika Summit being held by the CDC.


Perhaps the biggest news in this Sitrep are the long awaited details on the number of microcephalic births from Columbia, the second country in the Americas to report a significant spike in microcephaly after the arrival of Zika.


This from the PDF file:


On 30 March, Colombia reported 50 live births with microcephaly between 4 January 2016 and 20 March 2016. This number represents an increase compared to the historical annual average expected (140 per year).

The remaining cases (32) are under investigation, in order to establish the association with Zika virus infection. So far, eight of these 32 cases of microcephaly presented Zika virus positive results by real-time PCR. The investigation is ongoing and further information is expected.

This report also contains an expanded list of elevated GBS rates in the Americas, and their response plan.  Follow the link to download and read the report in its entirety.

Posted by Michael Coston at 2:09 PM