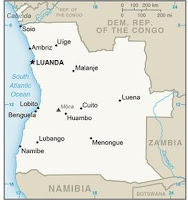 
The ongoing Yellow Fever (YF) Epidemic in Angola (along with neighboring DRC) has raised international concerns over the potential of this outbreak spilling over into more regions in Africa, and even around the globe (see JAMA: Yellow Fever - A New Global Health Emergency?).

We've already seen a number of cases exported to China (see WHO Yellow Fever Update - Imported Cases In China), and last March the ECDC issued a  Rapid Risk Assessment on Angola's Yellow Fever Outbreak which warned that YF is carried by the same mosquito that carries Dengue, and any region where Dengue circulates is potentially at risk for Yellow Fever transmission.

Today the ECDC has announced they will be sending a medical mission to Angola to review the situation there.   First the ECDC announcement, followed by excepts from the EU Commission's press release.

​There has been an ongoing outbreak of yellow fever in Angola that started in December 2015.

In that context, the European Commission is deploying under the leadership of ECDC a small team of public health experts, composed of experts from ECDC, participating Member States as well as DG ECHO, to the Republic of Angola within the framework of the European Union Civil Protection Mechanism (EUCPM) and using for the first time the European Medical Corps.

This mission, lasting for two weeks, aims to:

Review the epidemiological situation;
Look at the response measures currently being implemented;
Identify any public health risks for the EU.


The results and findings will be discussed with local public health authorities and the team will provide advice to the European Commission on mitigating the risk to the EU.

This mission is carried out in agreement with the Government of Angola and in close coordination with WHO.


A more detailed description comes from the EU Commission's website.


Amid the ongoing outbreak of yellow fever in the Republic of Angola, the European Union has deployed a team of medical experts under the European Medical Corps established earlier this year.

Experts from three EU Member States (Germany, Portugal and Belgium), the European Commission and the European Centre for Disease Prevention and Control will travel to the African country for what will be the first deployment of a public health team under the European Medical Corps.

"We have learned the lessons from the Ebola crisis. Already in February, we inaugurated the European Medical Corps to be able to react better to major health emergencies. Today, we are deploying a first team of public health experts as part of the European Medical Corps. They will complement the efforts of the Angolan government and work closely with the World Health Organisation and other international partners on the ground to deal with the yellow fever outbreak. Together we can understand it better and stop it faster," said European Commissioner for Humanitarian Aid and Crisis Management, Christos Stylianides.

The yellow fever outbreak started in Angola's capital Luanda in December 2015, but has quickly spread to other municipalities and provinces. So far over 2 000 suspected cases have been reported, including 260 deaths. Imported cases have also been reported from China, Kenya, the Democratic Republic of Congo, and Mauritania.

The European team of medical experts will develop a better understanding of the epidemiological characteristics of the outbreak, assess the risks for regional and international spread, implications for Europe and for Europeans travelling in the region, and examine ways to provide further expertise to the country in its mitigation efforts.

The mission will last about two weeks and will be implemented in close coordination with both the Angola government and the World Health Organization.

Posted by Michael Coston at 9:10 AM